[ The Korea Herald – Send E-mail ]
Samsung pushes drive for management restructuring
Rumors of Samsung setting up holding firm continue to swirl
By Kim Young-won
Published : May 10, 2015 - 20:24
Updated : May 10, 2015 - 20:24
The power succession from Samsung chairman Lee Kun-hee to his son Lee Jay-yong is underway through the conglomerate’s plan to strengthen the heir apparent’s governance of its major units.

The restructuring plan started in earnest with the de facto holding firm Samsung Everland’s acquisition of the fashion business division of Cheil Industries in 2013, the remainder of which was taken over by battery-maker Samsung SDI in March 2014.

Theme park operator Samsung Everland changed its name to Cheil Industries in June 2014 to keep the identity of the business group. Cheil Industries, established in 1954, was one of the original business units of Samsung Group. The company made its official debut on the Korean stock market in December 2014.

Market analysts speculate that the establishment of a holding firm would be the final touch to Samsung’s management restructuring. 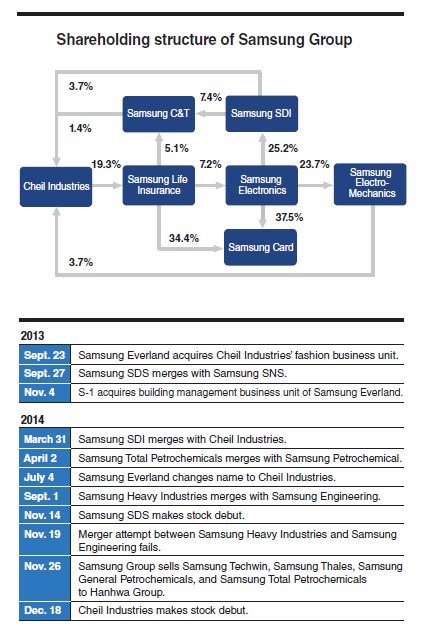 They argue that Samsung is planning to split tech giant Samsung Electronics into a business entity and an investment firm and then merge the investment firm with Cheil Industries to create Samsung Holdings.

A Samsung official denied the rumors, saying that “establishing a holding company would bring nothing but massive cost to hold shares in affiliates.”

Since 2013 Samsung Group has proceeded with almost a dozen mergers and acquisitions between Samsung affiliates and public offerings, and offloaded some of its affiliates, including defense businesses Samsung Thales and Samsung Techwin.

The moves are said to be aimed at both beefing up business efficiency and streamlining the business empire’s labyrinthine ownership structure.

Some market watchers said there is no need to establish a holding firm, at least for a while, since Jay-yong, the largest individual shareholder of Cheil Industries with a 23 percent stake, has already occupied the throne.

Cheil Industries sits on top of the intricate cross-shareholding structure of the conglomerate, which has a slew of businesses under its wing, including Samsung Insurance, Samsung Electronics, Samsung C&T, and Samsung SDI.