[ The Korea Herald – Send E-mail ]
[Herald Interview] ‘Diversity helps improve education’
By Yoon Min-sik
Published : May 4, 2015 - 19:29
Updated : May 5, 2015 - 08:58
At the student lounge of Nyenrode Business Universiteit in the Netherlands, students of different nationalities, appearance and accents are often seen together, pitching their opinions as they participate in an animated debate about the latest class they attended.

This scene is familiar in many universities across the Netherlands, representing one of the Dutch’s biggest strengths in education, said Han Dommers, head of the education promotion department at EP-Nuffic, which works for international cooperation in education.

“Diversity helps improve the quality of education. Students with different backgrounds, competence and skills ask different questions. This is a benefit for (students’) work in classrooms,” Dommers told The Korea Herald. 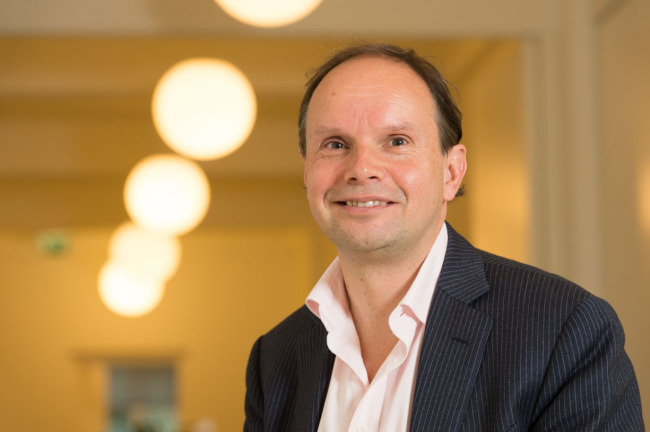 Han Dommers, head of the education promotion department at EP-Nuffic
He explained that having an international classroom can be beneficial in several aspects, such as students are given an opportunity to meet people from other countries and work with them at the early stages of their lives ― the knowledge and network they build helps students pursue professional goals in their later lives.

“You gain an interest in the country. When you do business, you know what kind of multinational staff the country has, what they can do there and where to find business,” he said.

Dommers added that Dutch people historically understood the importance of the international experience, speaking from his own experience as a former diplomat.

Rising as a global force in the 17th century through international trading, Dutch people appreciate the value of understanding and connecting with people from other countries. Even today, a foreign visitor asking for directions in the streets of the Hague can encounter at least a dozen Dutch people ― fluent in English ― eager to help.

“I think we’re very open. When people from other countries visit, we are very hospitable,” he said. “The other day, someone wanted to see where Prince Henrik lived and we ended up just talking about the royal family.”

Dommers also said Dutch people are not afraid of making mistakes when they speak in English, which is another reason behind their relatively high English skills.

“We know we cannot speak perfectly because it’s not our native language. But that is okay because if you don’t speak, you don’t learn. You don’t connect (with people from other countries),” he said.

The international aspect of Dutch education is reflected in the country’s some 2,100 higher education study programs and courses conducted in English, the most in continental Europe. This has helped to attract students from across the world to the Netherlands, which in turn has helped to prove the value of an international classroom.

“International classrooms in particular can present challenges, because you have people from different backgrounds and cultures,” he said. “You don’t have time to learn everything, so if you talk with people from other countries it is always helpful.”

But diversity in education is not just confined to working with classmates of different backgrounds. Dommers said students need to be pioneers to uncover the different aspects of the education. He said they should not be afraid to ask questions and challenge lecturers about their classes and not be content with just being fed the same information.

As such, Dommers said the recent rise in online education ― such as Massive Open Online Courses ― have both benefits and shortcomings.

“It is still important to meet each other and interact. When you ask questions via the Internet, it’s two-dimensional,” he said. He added that student-teacher interaction, critical to students’ developing creativity, is limited online.

Despite its shortcomings, online education can help students with less financial means receive an education at a foreign university. The challenge is how to create ways for students to reap the benefits of an international classroom through the Internet.

More open interaction with other students is one thing that some Korean students can work more on, Dommers said. But he also said he was impressed with the diligence and intelligence of Koreans when he worked with them, and Korean students in the Netherlands can help develop a foundation for connecting the two countries in the future.

According to Dommers, this “public diplomacy” is a more abstract advantage of diverse education. By maintaining contact and understanding with each other, students from different countries can bring the two countries closer, he said.

“What I like about Korean students is that they can become ambassadors for the relationship between Korea and the Netherlands,” Dommers said.

“Of course, we need formal ambassadors for diplomatic relations. But in this era, we also need people from other countries who now work and live here to be ambassadors in other things in life.”