[ The Korea Herald – Send E-mail ]
[Herald Interview] ‘Pyroprocessing not answer to spent fuel problem’
By Shin Hyon-hee
Published : May 3, 2015 - 20:03
Updated : May 3, 2015 - 20:03
Though the recent revision to an atomic energy pact with the U.S. allows South Korea’s study of pyroprocessing, the nascent technology will likely increase electricity costs while failing to reduce the stockpile of spent fuel here, a leading nuclear scientist has said.

Under the amendment, Seoul secured Washington’s consent to carry out electroreduction, the first stage of pyroprocessing, which Korean experts have touted as a possible solution to deal with its mountain of used fuel rods. The technology is less prone to proliferation risks, as it produces plutonium mixed with safer fissile materials.

But James Acton, codirector of the nuclear policy program at the Carnegie Endowment for International Peace, a Washington-based think tank, stressed that South Korea could only maintain current power prices by continuing to buy its nuclear fuel in the global market, due to the massive research and implementation costs required for reprocessing.

He said Seoul should instead craft a long-term management strategy.

“Every country that has done some form of reprocessing has found it more expensive and it adds to the costs of energy. … Electricity is more expensive in Japan because of reprocessing,” he told The Korea Herald on the sidelines of the Asan Plenum hosted by the Asan Institute for Policy Studies in Seoul last week.

Despite the joint 10-year fuel cycle study being conducted by the allies, pyroprocessing will take much longer to produce results, especially as they will also need to develop other key technologies, such as fast reactors and fuel fabrication methods, he added. 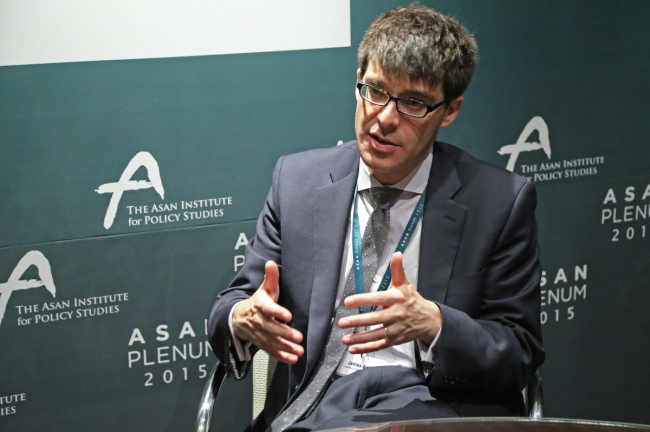 James Acton, codirector of the nuclear policy program at the Carnegie Endowment for International Peace, speaks during an interview with The Korea Herald on the sidelines of the Asan Plenum hosted by the Asan Institute for Policy Studies in Seoul last week. (Asan Institute for Policy Studies)
“To make any difference in Korea on spent fuel with pyroprocessing is going to take 20 or 30 or 40 or 50 years. Maybe it will work out very well,” Acton said.

“But my big message to Koreans is that pyroprocessing will not solve your spent fuel problems in the next few decades. And irrespective of what happens, you need a long-term spent fuel management strategy as soon as possible.”

An advisory panel consisting of municipal leaders, scholars and environmental activists was launched in October 2013 here to look into various options including storage, disposal and reprocessing at home or overseas. It is mandated to make suggestions by the end of June but discussions have made little progress as the parties struggle to close the gaps in their views and some civic groups refuse to participate.

One of the major features of the new so-called 123 agreement is a leeway for South Korea to enrich uranium up to 20 percent if necessary through bilateral consultations. The U.S., meanwhile, is to ensure a reliable supply of fuel for 24 reactors here.

The clauses could be seen as a small diplomatic coup for Seoul as enrichment and reprocessing had emerged a central political issue in the negotiations. Some had raised speculation that Washington could push Seoul to renounce the techniques in the text, as it did with the United Arab Emirates and Taiwan.

The South Korea-U.S. pact appears to be “fair and good” since it benefits both countries as major operators and exporters of reactors, the U.K.-born scholar said, adding that the so-called gold standard would weaken the United States’ industrial edge and global nonproliferation regime.

“If this was 50 years ago or 40 years ago where the U.S. and Soviet Union had a monopoly on nuclear technology, the gold standard would have made sense,” Acton said.

“Today’s very different because there are lots of suppliers of nuclear energy. … So I would rather like the U.S. to have a strong export market in nuclear power and to promote good nonproliferation rather than promoting perfect nonproliferation and having no industry or not selling nuclear reactors.”

South Korea, for its part, is also “not missing out” because the deal differs from the one that the U.S. and other five world powers struck recently with Iran, which he said was “not attractive for a country that is serious about nuclear energy.”

In the wake of the framework agreement, the Iranian threat will now be “significantly reduced” with additional scrutiny and limits on its nuclear program, while North Korea will remain a top proliferation concern, he noted.

“The fundamental issue is that if we don’t strike a deal with Iran, it will still have an enrichment program which will be much bigger and have no constraints on it,” Acton said.