[ The Korea Herald – Send E-mail ]
White House calls for 'final resolution' of Korea-Japan history issues
By 송상호
Published : Apr 25, 2015 - 10:14
Updated : Apr 25, 2015 - 14:54
History tensions between South Korea and Japan should be addressed in a way that is not only "honest, constructive and forthright" but also reaches a "final resolution," a senior White House official said Friday.

The remark from Evan Medeiros, senior director for Asian affairs at the White House's National Security Council, was seen as pressure on Japan to resolve historical tensions with Seoul ahead of Japanese Prime Minister Shinzo Abe's visit to the United States. 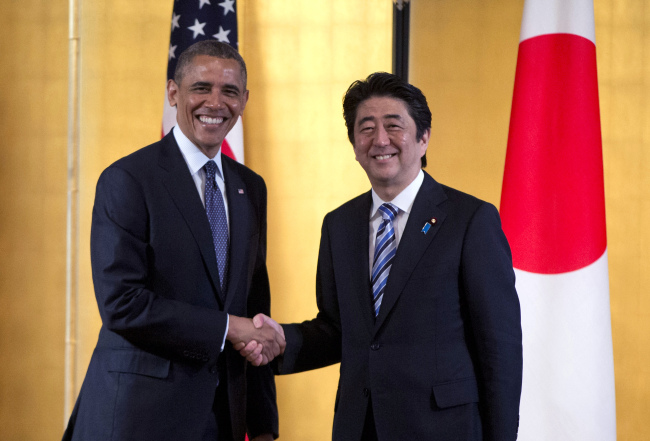 President Barack Obama shakes hands with Japanese Prime Minister Shinzo Abe as they arrive to participate in a bilateral meeting at the Akasaka State Guest House in Tokyo last April. (AP-Yonhap)
"We always stress that it's important to address history questions in honest, constructive and forthright manner that promotes healing but also in a way that reaches a final resolution," Medeiros said during a conference call with reporters.

"We are very supportive of diplomatic efforts between Japan and the ROK to improve their relationship. We think all sides should address history issues from that perspective of being constructive and focusing on the future and final resolutions."

Abe is set to arrive in the U.S. on Sunday for a weeklong trip that includes summit talks with President Barack Obama and an address to a joint session of Congress, the first Japanese prime minister to do so.

Critics have said Abe is unworthy of the privilege because he has attempted to whitewash Japan's militaristic past and wartime atrocities, especially the sexual enslavement of women during World War II, refusing to acknowledge the country's responsibility and compensate victims.

In the run-up to the visit, calls have been mounting in the U.S. for him to use the visit as a chance to improve relations with South Korea, including a bipartisan group of 25 congressmen sending a joint letter urging Abe to address history issues.

Relations between Seoul and Tokyo have been badly strained for years, due mainly to Tokyo's attempts to whitewash its wartime atrocities and colonial occupation. Abe's trip is seen as a bellwether of the ties amid widespread views that the relations are unlikely to improve unless he offers a sincere apology.

Frayed relations between the two allies have been a key cause for concern for the U.S. as it seeks to bolster three-way security cooperation, seen as a key pillar for President Barack Obama's "pivot to Asia" initiative aimed in part at keeping a rising China in check.

"We believe that a better, closer, more constructive relationship between Japan and the ROK contributes to peace and security in Northeast Asia," Medeiros said. "That approach ... should be one that is honest and forthright and focus on the future."

Deputy National Security Adviser Ben Rhodes said the U.S. has encouraged Abe to constructively address historical issues "consistent with Japan's past statements," apparently referring to previous statements of apology, such as the Kono and Murayama statements that have served as the basis for Seoul's relations with Tokyo. (Yonhap)