On the surface, the two regions do not seem to have crossed paths as they have totally different economies, cultures and ideals. Above all, religion may be what divides the two. While the religious heritage of Korea derives mostly from Buddhism, Confucianism and more recently Christianity, the Middle East is deeply rooted in the Islamic teachings of Prophet Muhammad.

Yet, scholars say the two sides’ cross-cultural relations date back to the seventh century ― the era of the Kingdom of Unified Silla in Korea and, in the Middle East, the Islamic Golden Age. This was when the Muslim world spanned from the Philippines in the East to the Iberian Peninsula in the West.

Muslim merchants and traders traveled via the Silk Road to China’s Tang-era capital of Changan, today’s Xian, with which the Unified Silla had close political and business ties, the scholar explained.

Commercial relations between the two eventually expanded into culture, arts, science and technology with both sides depicting each other in their poems and songs. 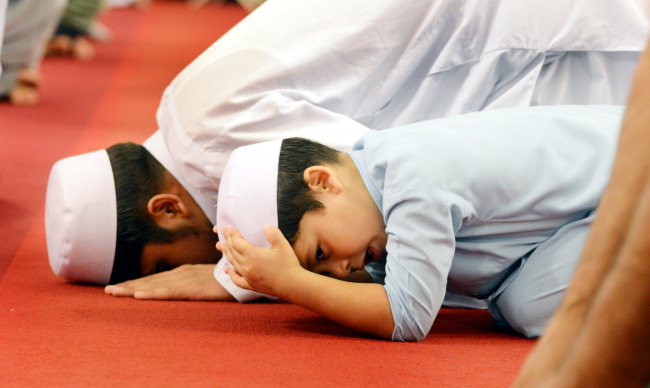 The number of Muslims is growing steadily in Korea. (The Korea Herald)
In “Ssanghwajeom,” a lyrical poem from Korea’s Goryeo era, a line says: “When visiting Ssanghwajeom to buy Ssanghwa, a Hoehoe grabbed my wrist.”

Ssanghwa refers to a Turkish dumpling and jeom means a shop. Hoehoe is a Chinese character for Islam, thus an Arab who owns the dumpling store.

“From this lyric, we can say that there were Muslim merchants in Korea during the Goryeo period, and there was the first mosque, which they used for prayer, not for missionary work,” said Kim Ah-young, director of the Center for Islamic Studies.

The two sides maintained their relations mostly in commerce until the Muslims extended their contribution to Korea by advising the Joseon Dynasty in science and technology.

“At that time, the Arabs had the best scientists in the world, and they contributed to Korea’s innovation,” Lee explained.

The Muslim community was invited to recite the Quran during the Joseon’s court ceremonies, indicating their significant presence in the country.

However, Islam in Korea soon disappeared as the dynasty implemented a closed-door policy toward foreign culture and customs except those of China.

It was not until the Korean War (1950-1953) that the Islam culture began reemerging in South Korea following the arrival of troops from Turkey, the second-biggest contingent after the U.S., to aid South Korea in the inter-Korean conflict.

In terms of religion, Islam became recognized following the foundation of the Korea Muslim Federation in 1965 in Seoul.

This not only further led the opportunity for Muslims to spread the word of Allah and Prophet Muhammad in South Korea through the holy book of Quran, but also to establish the country’s first official mosque for both Muslims and Koreans in 1976.

There are now 15 mosques nationwide, with about 200,000 Muslims, including ethnic Koreans.

Economic exchanges between Korea and the Middle East have flourished in recent decades.

In the 1970s and 1980s, a slew of Korean laborers went to the region to build its infrastructure such as roads and bridges. The Middle East construction boom helped spur Korea’s economic development at home.

Over the last 40 years, about 70 percent of Korea’s overseas construction and energy infrastructure projects are in the Middle East.

Also, almost 90 percent of the country’s energy import sources such as crude oil come from the Middle East.

“The two sides were destined to be partners,” Lee said.

“The Middle East is a very important market for Korea, which should now pass down our economic development model to the region like the Arabs did (during the early Joseon Dynasty).”

Unlike the prolonged wrangling relations between Islam and the West, Korea has not faced any historic or political conflict with the Middle East in their relationship that extends more than 1,000 years.

Islamic countries generally have a friendly image of Korea, and hallyu, or the Korean wave, has reached the Middle East region where the popular Korean TV drama “Dae Jang Geum” (“Jewel in the Palace”) has been enjoying high ratings, Lee noted.

However, Islam is often viewed negatively especially after the 9/11 terrorist attacks in the U.S. and due to terrorism by militant groups such as Islamic State and al-Qaida.

Experts said such terrorist organizations, which are being condemned by Muslim leaders and scholars, are only a “very small part” of Islam, or less than 1 percent of some 1.6 billion people in the 57 states of the Organization of Islamic Cooperation.

As Korea seeks to find a second business opportunity in the Middle East following the 1970s-1980s construction boom, the time is ripe for the country to deepen its understanding of Islam.

Koreans need to learn to expand their understanding in various fields such as economics, culture and religion so the two sides can maintain a sustainable and healthy relationship, scholars said.