Dongkuk is the second steelmaker to be mired in allegations of irregular practices after POSCO this year. It is the nation’s third-largest steelmaker after POSCO and Hyundai Steel.

Chang is suspected of embezzling about 20 billion won ($18.4 million) from the company, and of habitually gambling illegally. The prosecution requested an arrest warrant for him Thursday after grilling him over the charges.

Like many other local businesspeople with family connections, Chang was born with a silver spoon with his grandfather having laid the foundations for Dongkuk Steel Mill.

However, he stood out from his peers in that he climbed the corporate ladder much like any other ordinary employee.

He joined the steel firm as a rank-and-file employee in 1978, and went through the usual promotions until he was named CEO in 1999. 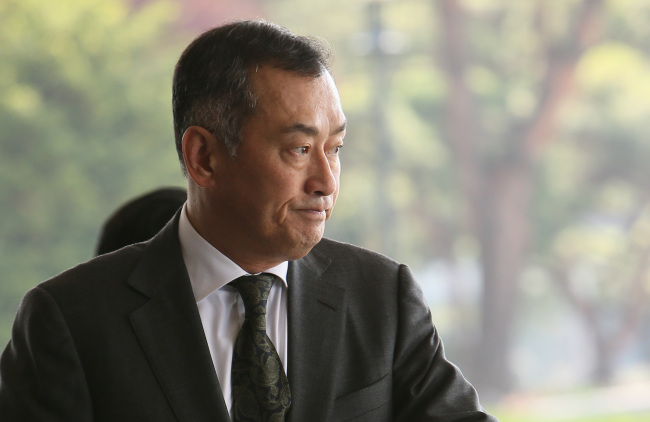 For a time, Chang’s leadership appeared to be working out well for the company with sales reaching 2 trillion won in 2003, and then 3 trillion won the following year.

In addition to boosting the company’s figures, Chang was also behind the steelmaker’s ambitious plans to enter the Brazilian market.

In 2008, it established Companhia Siderrgica do Pecm, a joint venture with Vale SA and POSCO to build a mill that can produce 3.21 million tons of crude steel a year starting in 2016. Dongkuk has invested 862 billion won into the project.

Chang’s past, however, is not all glory and achievements.

In 2004, he was found guilty of embezzlement and malpractice after it was revealed he used company funds for personal purposes including settling his own debts. Chang was pardoned three years later.

His expansion drive may also have contributed to the company’s current predicaments.

As a result, its earnings have declined and the company and its affiliates posted a net loss of nearly 300 billion won last year.

Chang’s latest run-in with the law is also casting a deep cloud over the Brazil project, which was hailed as a stepping-stone for the company’s aim to be a global contender.

According to industry sources, Dongkuk’s plans to borrow $3 billion from local and foreign financial institutions to fund the Brazil project could hit a snag.

It has yet to secure the loans although the funds should have been in place early this month.

While the company attributes the delay to minor kinks being worked out, industry watchers suspect that Chang’s alleged wrongdoings are likely to be the real cause.