“We want to grow 67 percent in sales by 2020,” said Ulf Ausprung, chief executive of Han Sung Motor, at a press conference held to mark the firm’s 30-year anniversary at the Lotte Hotel, Seoul.

“(By 2020), we are going to increase the workforce by 50 percent and will continue to invest in expanding the sales network to raise accessibility to our customers,” he said. 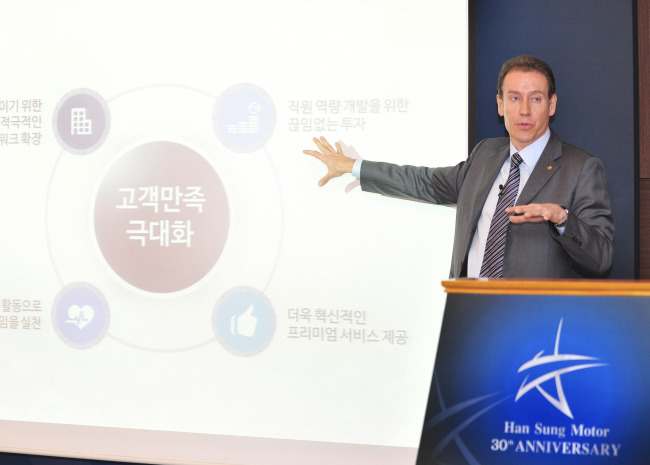 As a frontrunner in introducing foreign cars in Korea, Han Sung Motor has built its legacy here for the past three decades.

“We consider ourselves as pioneers (in the foreign car market),” he said.

Founded in 1985, the first foreign car dealer started its business with five employees. The company sold only 10 vehicles in 1987.

In three decades, the company is forecast to sell more than 18,000 cars and the number of employees will reach up to 1,400 this year.

As a long-term foreign investor in Korea, the company chief also promised responsibility for the community and society as well.

The Han Sung Motor chief said the company will further expand its flagship social responsibility program, dubbed “Dream Gream (paint) Project,” which aims to nurture young artistic talents. The company has doubled the number of sponsored students for the program to 40 this year, in an effort to expand its social contribution.