[ The Korea Herald – Send E-mail ]
‘SK Telecom has no plan to split’
CEO Jang announces new growth strategy
By Kim Young-won
Published : Apr 23, 2015 - 20:17
Updated : Apr 23, 2015 - 20:17
South Korea’s top mobile carrier SK Telecom said Thursday it is not considering any proposal to divide the organization into two bodies ― one for business and the other for investment.

“SKT does not have any plan regarding the establishment of the investment entity, as claimed by many industry watchers,” said Jang Dong-hyun, chief executive of the mobile carrier, at a press conference in which he announced the new business strategy of the firm.

Market analysts have long speculated that the nation’s No.1 wireless carrier would split the company into business and investment units in a bid to enhance its management efficiency, with the latter merging with SK Holdings, the holding firm of SK Group. 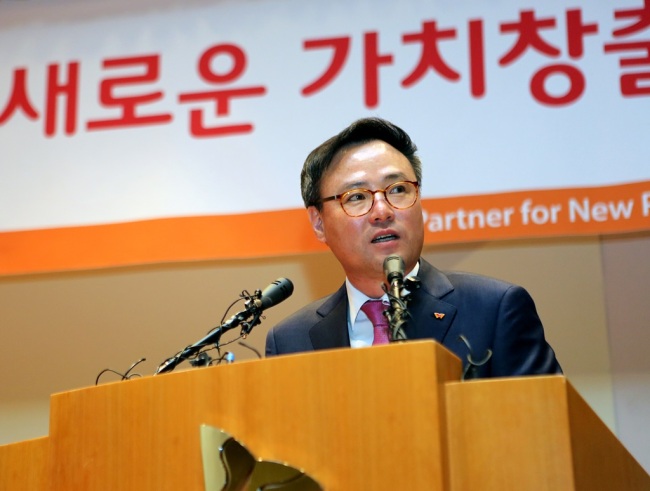 The company said the acquisition was aimed at increasing business efficiency by merging similar services.

“SKT will try to reach a market value of 100 trillion won ($92.3 billion) by 2018 through innovation made with the next-gen platforms,” he said.

The Lifestyle Enhancement Platform is aimed at providing services relevant to customers’ lifestyle such as shopping, security, finance and education.

SKT will offer personalized digital content to its subscribers through the Advanced Media Platform, and aims to secure 15 million subscribers by 2018.

Aiming to keep pace with rapid changes taking place in the upcoming ear of Internet of Things, SKT said it would put more resources into developing business models for individual and enterprise customers with the IoT Service Platform.

The telecom firm will launch a Smart Home service, which enables users to control diverse home appliances, including dehumidifiers, door locks and boilers, via smartphones.

SKT is currently working together with SK Broadband and SK Group’s online commerce firm SK Planet to create a decision making body that coordinates the entire platform businesses, according to the CEO.