[ The Korea Herald – Send E-mail ]
Young generation learns new meaning of unification
State institute focuses field studies on need for one Korea
By Korea Herald
Published : Apr 23, 2015 - 20:23
Updated : Apr 23, 2015 - 20:23
“I want to work as a biologist in a unified Korea,” said Kim Da-eun, a sixth-grader from Pandong elementary school. “I heard that a lot of North Korean children are sick because they don’t have enough food. I want to study genetics and use it to cure them,” she said, brimming with confidence.

Kim was among 30 students from the school attending a class provided by the Center for Unified Future of Korea, a state-run academic institute for teaching students about the two Koreas’ reunification.

In the class titled, “Designing Future Cities in Korea,” Kim drew a long line across a big white paper laying on the floor, to create a map of the Korean peninsula after reunification. She said along the line that she drew would sit an environment park.

“Designing Future Cities in Korea” is one of the classes provided by the center. The students usually spend two or three days at the institute taking classes to learn about the significance of unification.

“It is so much fun,” said Lee Hyung-jun, a fifth-grader at the elementary school. “Unlike classes in our school, I don’t have to read thick books and watch boring videos here.”

Instead, he put together a jigsaw puzzle of Mount Geumgang and took a virtual train heading to the future and drove all the way to Moscow.

“Now I can see what it is like to live in a unified country,” said Lee.

The center reflects the changing trend in the government-led education on Korea’s unification to get the young generation motivated. 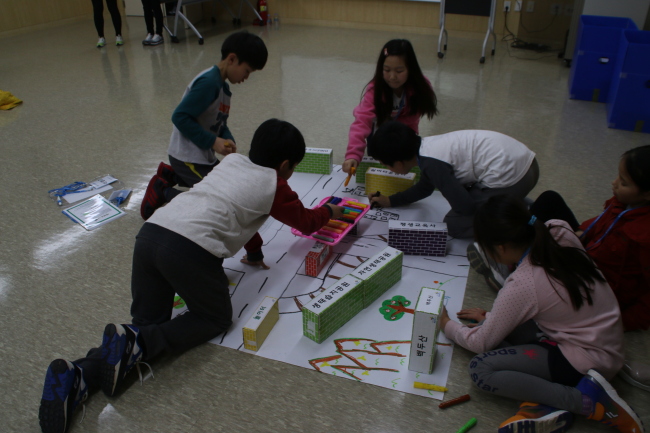 Students draw a map of reunified Korea during an activity class at the Center for Unified Future of Korea. (Yeo Jun-suk/The Korea Herald)
It was created to deviate from the traditional method of teaching the students through textbooks about unification, and instead offer entertaining games and hands-on programs to envision what the unification would really be like.

The center was built in 2014 after having been envisioned by former President Lee Myung-bak in 2008 to build a sport center for young people inside the DMZ.

The plan was later revised as the two Koreas’ confrontation persisted. In 2009, the center’s location was moved to outside the DMZ. In 2013, lawmakers asked the agency to change its name to reflect the reality between the two Koreas. The center was initially called a center for promoting exchanges between South and North Korean teenagers.

“That doesn’t mean we abandon our efforts to reach out to North Korean young people,” said Lee Jung-hee, an official from the center. “We have invited North Korean athletes, and we will continue such efforts. In the meantime, we will approach students in the South to ensure they have robust understanding of the two Korea’s unification,” said Lee.

The North Korean junior football team visited the center in November last year as the first group of guests. Five months after the visit, it officially opened its door to the general public.

“Our main visitors are young students from primary and secondary schools,” said Lee. “So far, 4,689 students have taken classes here and 28,195 from 86 schools are scheduled to visit the center this year. We are aiming to accommodate 30,000 students every year,” said Lee.

While at the center, the students travel to Imjingak Resort and Dora Observatory, a popular tourist spot close to the border, to see how geographically close the two Koreas are. They also tour the third tunnel ― an infiltration tunnel made by the North ― to remind themselves that the two Koreas are still technically at war.

“Educating children about the unification is a long-term investment,” said Oh Chung-sae, an instructor at the center. “Back in the days, the education was all about vilifying North Korea. I guess it only pushed children’s attention away from unification. We need to get them familiarized and engaged with what the unification means and what it entails,” said Oh.

Previously, the education on Korea’s unification was mostly focused on fending off the North during the authoritarian regime ― particularly the 1970s when the military government ruled Korea with an iron-fist in its push to heighten national allegiance and ward off antigovernment forces. Students went through intensive classes, which were not highlighted on unification per se, but rather focused on “anticommunism” to instill a sense of antagonism against the North.

“I thought North Koreans were evildoers with two horns,” said 56-year-old Kim Young-ki who was an elementary school student during the early 1970s. “Back when I was a student, there were a lot of contests for promoting anticommunism. I used to participate in drawing contests where every competitor described the North as a red-faced demon with a trident. Stupid as it sounds now, I thought it was what they might look like.”

Since the authoritarian regime collapsed, the unification education has alternated left and right depending on which political party took power. For instance, enhancing inter-Korean economic cooperation was taught during the liberal administrations, but North Korea’s military threats and dire human right conditions have been dominant throughout the conservative administrations, according to research from the Korea Institute for National Unification

“It is a shame that there has been no consistency in the education for students,” said Cho Jeong-ah, Senior Research Fellow at KINU. “I believe the education should be implemented in a way that it is delinked from which parties take control of the government,” Cho said.

Young people’s aloofness toward unification is not new to Koreans. According to a survey by the Institute for Peace and Unification Studies Seoul National University, in 2014, only 40 percent of those in their 20s said that unification was “necessary” and less than 10 percent said it should be pursed “as soon as possible.”

“I understand the seriousness of the issue,” said instructor Oh. “That is why we are doing our utmost to capture young people’s attention. We are employing the latest IT technologies to keep the students informed and interested.”

“We are also hoping to reach out to a broader spectrum of students. We are planning to bring in more foreign students and North Korean defectors. Looking at the defectors point to their houses via Google Map was one of the most poignant moments throughout my career,” said Oh. “I wish we had enough manpower to materialize our vision.”

Despite the concerns over young people’s indifference toward unification, students here said they have become more interested than before in the process. “I think the program (here) is more educational than other programs during typical school trips,” said Chun Sung-min, a sixth grader visiting the center. Asked if more could be done, “I wish I could see real North Korean sixth graders. I am wondering what they eat and how they play,” he said.

The center is located where the 38th parallel crosses. Seventy years ago on this day, the two Koreas were divided across the parallel. Since then, it has been known as “the last frontier of the Cold War.”