But their efforts fell on cold eyes and deaf ears, as the bereaved families of the Sewol ferry disaster expressed anger at the governing Saenuri Party and Park, criticizing their “unwillingness” to probe the disaster’s causes and salvage the sunken ferry.

President Park visited Jindo Harbor, widely referred to by its old name Paengmok Harbor. She vowed to “seriously consider” salvaging Sewol from the seabed. She fell short of an official promise to initiate operations. 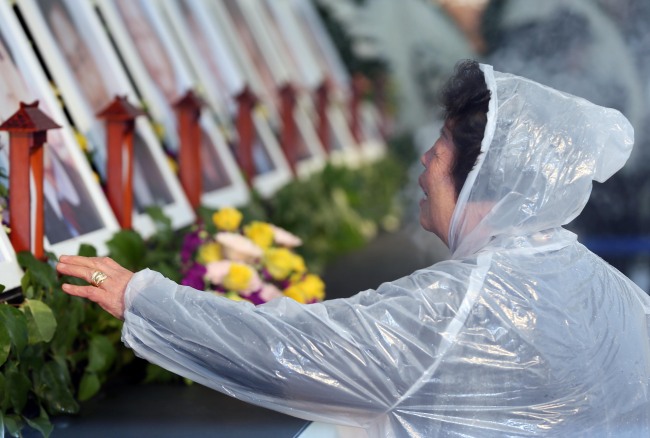 A victim’s family member cries while laying a flower at a memorial held in Incheon to mark the first anniversary of the Sewol ferry disaster on Thursday. (Yonhap)
The ship lies some 40 meters below the surface near Jindo Island, South Jeolla Province, where it sank on April 16 last year. The tragedy left 304 dead, with nine bodies still missing. Families say the bodies are likely inside the shipwreck.

But families of the missing, who have camped in makeshift homes at Jindo Harbor since the accident, vacated the spot upon hearing of the president’s planned visit, in an apparent show of protest.

Prime Minister Lee Wan-koo and Saenuri Party chair Rep. Kim Moo-sung also made separate visits to a memorial altar at Ansan, Gyeonggi Province, where the pictures of 273 victims are displayed, most of them former students at Danwon High School in Ansan.

But bereaved families there turned their backs on the prime minister, asking that he leave the memorial.

“We do not want to hear that you will do your best (to salvage the ship), prime minister, we want an outright commitment that the government will start salvage operations,” said Jeon Myeong-seon, a spokesman for the victims’ relatives.

Relatives also urged the government to repeal an enforcement decree that formed a special committee to investigate the sinking. The decree puts investigators under the watch of the Ministry of Oceans and Fisheries and the presidential office. The relatives oppose government officials sitting on the probe panel. The government should be a subject of the probe, not a member of it, they said.

A brawl between the bereaved and Saenuri Party officials broke out at the memorial altar when Kim visited later Thursday.

Kim was unable to pay his respects due to the families’ opposition to his visit, a witness said. Police broke up the scrum, before he left the scene under police protection.

The victims’ families eventually canceled the memorial service at the Ansan altar, saying that the government had failed to heed their demands to salvage the ship and repeal the decree on future probes.

“We listened to President Park’s speech today,” Yoo Gyoung-geun, a family spokesman and a father of a victim, said. “But everything she said was absolutely meaningless.”

Yoo had stopped by the harbor to attend a memorial service but left when families of the student victims booed and demanded he leave.

Meanwhile, lawmakers at the National Assembly passed a resolution earlier Thursday, urging the Park administration to salvage the Sewol. The bipartisan resolution passed 161 to 2, with two legislators abstaining.

Lawmakers wore black at the plenary meeting Thursday, and held a moment of silence before the vote.

In Ansan, a siren rang throughout the industrial city of 760,000 at 10 a.m. signaling a moment of silence.