A South Korean jetliner ran off the runway as it landed at Japan's Hiroshima Airport on Tuesday, leaving almost 20 people slightly injured, according to officials and news reports.

Asiana Airlines Flight 162, carrying 73 passengers and seven crew members, came to a stop after veering off the runway at 8:05 p.m., as it came in to land. The Airbus 320 passenger plane departed from Incheon International Airport in South Korea at 6:30 p.m. 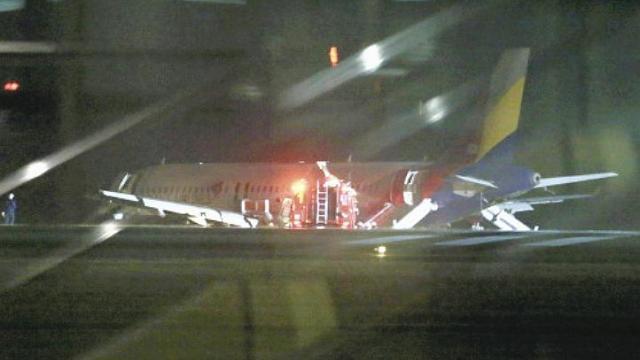 More than 20 people were injured after an Asiana Airways Airbus A320 overran the runway at Hiroshima Airport on Tuesday night. Yomiuri Shimbun /ANN
All passengers and crew were immediately evacuated from the jet using an escape slide. Passengers appeared to have sustained bruises and other light injures during the evacuation.

Eight of the passengers were from South Korea; 46 from Japan; nine from China; two each from Sweden, the United States and Canada; and one each from the Philippines, Russia, Vietnam and Singapore, according to Asiana officials.

Asiana Airlines said 18 people were injured, but all of them except one had been sent back home after being treated. One Japanese passenger remains in the hospital with bumps and bruises, they added.

The airliner added that it has formed a special task force and sent a group of officials to the scene to figure out the exact cause of the accident and provide support for the passengers.

The South Korea consulate in Hiroshima said it contacted seven of the eight Korean passengers and confirmed four of them sustained light injuries. Consulate officials said they were trying to contact the remaining Korean passenger.

"The plane shook a lot even before landing, and I felt it bounded off at the time of landing," one passenger said. "I saw flames coming out of the engine and smoke came into the cabin."

Japan's public station, NHK, reported that the airport reported to authorities that the plane's rear touched the ground and caused sparks. Citing police, Kyodo News reported that part of the jet's left wing and the engine were damaged.

According to Japan's land and transportation ministry, a 6.4-meter-tall facility, which was about 300 meters away from the runway, was damaged in the accident and what appeared to be a part of that facility was found near a left wheel of the plane.

The exact cause of the accident is under investigation.

Light rain and fog were reported around the airport at the time of the accident.

The airport's runway was closed as of 8:20 p.m., forcing the cancellation of a series of flights.

Asiana has set up a task force in the accident's aftermath.