An exhibition looking at the main figures involved in the media coverage of the sinking opened Wednesday to mark the anniversary of the disaster.

The exhibition, “After Death, a Tiger’s Skin Remains; A Man Leaves Only His Name” ― the title coming from an eight-character traditional proverb ― features paintings of key figures in the incident. They are made using “dojang,” a seal-type stamp Koreans use for official purposes.

“The name stamps have some form of permanence with regard to human life,” said Martyn Thompson, the artist behind the exhibition. He pointed out that Koreans use their stamps on artwork, letters, inventions and other things they have created or developed. 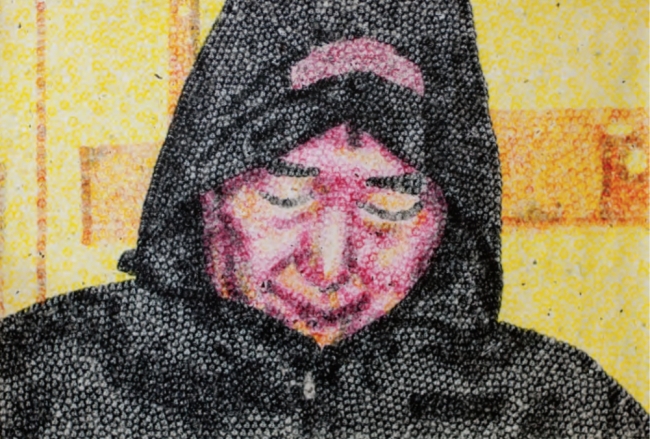 “The Captain” by Martyn Thompson
“Most of those students who died in the accident weren’t able to get their name stamps, so they weren’t able to leave any impression on the world. In a way, it is meant as a kind of an honor to the students how I have been using the dojang to stamp their permanence back into the world,” he said.

The stamps themselves carry words related to the subject’s portrayal in the media coverage of the disaster, such as “bug” for the ship’s captain and “courage” for one of the students.

For Thompson, the incident made him reevaluate whether Korea was a safe place for his family.

“It really made me wonder whether I can trust Korea with creating a safe environment for myself and my son,” he said.

The work is also intended to reflect on the media’s poor handling of the disaster, which was frequently erroneous, at one point claiming all passengers had been saved. Thompson also criticizes the coverage as insensitive, for example through intrusive photography.

But the matter is politically sensitive and he is also expecting criticism. The political aspect is something he does not feel able to talk about due to the ban on foreign nationals engaging in political activities.

“Even though I am here and married and have a permanent visa, I don’t feel safe having a strong political voice in the country. I don’t think there is very much freedom of speech,” he said.

He was invited for a TV interview on the Sewol, but it did not happen as he told them he couldn’t answer questions related to the political situation.

“I said I cannot be politically engaged in any material that could put my future in Korea in jeopardy,” he explained.

The exhibition runs until April 21 at Gallery i in Insa-dong, Seoul. A formal opening will be held Saturday from 4-6 p.m.