In his third visit to Korea and the second with his own band, High Flying Birds, the British singer performed songs from his latest album “Chasing Yesterday.”

Released in February, the album is a follow-up to his band’s eponymous debut album four years ago. After working on albums for Oasis, with which he parted ways in 2009, it was his first real attempt at self-producing. 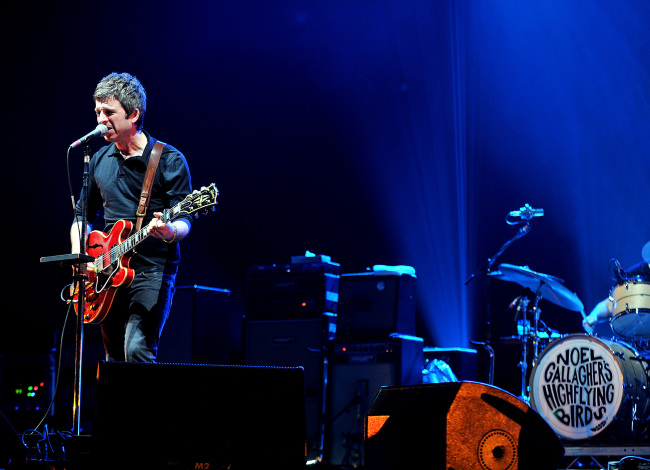 For the album, he said he composed around 25 songs, which he then demoed and continuously studied for about a year before finally deciding which ones would make the final cut.

“I’ve made records with Oasis. I knew exactly what the album was going to be in running order ― everything before I even started,” he said. “But this (the latest album) was changing as the weeks went by.”

Gallagher first visited Korea in 2009 as a member of Oasis. His second visit was in 2012 with High Flying Birds.

“When I first came to Korea, we had never been before and we hadn’t known anyone else who had been. We didn’t know what to expect,” he said.

“We thought that because it was so close to Japan that the people were going to be like the Japanese, but we soon found out that nothing could be further from the truth,” he added. “Ever since that first visit, I have always looked forward at looking at the tour list and seeing where Korea is; I knew it was going to be a great show because the people are up for it.”

That is despite an unpleasant incident he had with a local fan on his last visit here.

During his 2012 visit, the notoriously sharped-tongued singer had publicly announced that one of his fans had ruined his expensive jacket at the airport with a pen that he or she was supposedly holding out for an autograph. The rocker then made quite a splash in the local media, going as far as saying during a TV interview, “I will f― you up if I ever find you.”

Nonetheless, hordes of local fans showed up at the airport to greet the rocker this time again, some handing the rock star small gifts.

One gift later turned out to be a picture of his brother Liam Gallagher (with whom he had a tumultuous falling out following his departure from Oasis).

When asked if the fans’ photo gifts riled the singer, he said it was a pleasantly hysterical surprise.

“It was very, very funny,” said Gallagher. “I f―ing pissed myself it was so funny.”

Noel Gallagher’s High Flying Birds will continue on its world tour, heading off to Japan where the band will perform in Osaka, Hiroshima, Fukuoka, Nagoya and Tokyo.