[ The Korea Herald – Send E-mail ]
Parents of ferry disaster victims refuse state reparation plan
By Korea Herald
Published : Apr 2, 2015 - 19:58
Updated : Apr 2, 2015 - 19:58
A group of parents of some of the high school students killed in a ferry accident last year lambasted the government’s reparation plans on Thursday, demanding a thorough probe into the accident’s causes and the recovery of the sunken ship instead.

In a rally at the Gwanghwamun Square in Seoul, the parents shaved their heads to protest what they called the “government’s unilateral decision to pay reparations against the parents’ wishes.”

“We have never asked for money,” said Yoo Gyoung-geun, a family spokesman who lost his daughter in the disaster. 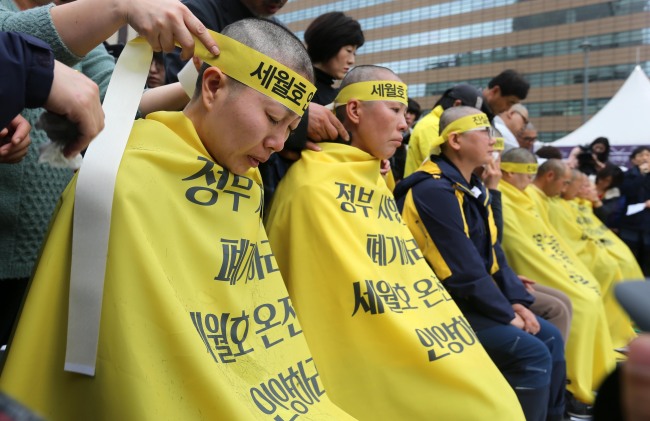 Relatives of the victims of the Sewol ferry disaster shave their heads in Gwanghwamun Square in downtown Seoul, Thursday. (Yonhap)
“All we ask is that the ferry be towed out from the sea, so that those still missing can be found and that officials fully investigate the cause of the disaster,” Yoo added.

The 6,800-ton passenger ferryboat Sewol sank in waters off southwestern Korea last April, killing 304. Nine are still missing. Most of those killed were students of Danwon High School at Ansan, Gyeonggi Province, an industrial town south of Seoul.

The Oceans Ministry announced Wednesday that the government would pay about 720 million won ($657,000) to every family that lost a child in the disaster. The costs were tallied by taking into account the foregone wages of the teenagers who had not lived to be adults.

Families said Thursday’s conference was organized to express their “utter disgust” at such plans.

“Do you think it’s just going to be OK if you throw money at us?” one mother yelled in anger. “Why do we have to be the ones suffering on the streets? What have we done to deserve this?”

Most of the fathers remained silent, their eyes closed, with looks of both despair and determination.

Supporters of the families shaved the heads of about 50 parents. Some of the mothers started weeping as their long wavy hair slowly fell to the gray asphalt streets of downtown Seoul.

The families also demanded the government give more authority to a special investigative committee formed earlier this year to investigate the disaster’s causes.

The committee was formed after the bereaved families refused to accept the results of earlier prosecutorial and parliamentary probes, saying they were insufficient.

The committee’s mandate, written by the government last month, would put investigators under the close watch of the Oceans Ministry, which some families accuse of avoiding responsibility for the accident. It comes into effect next Monday.

Some of the families, and 10 of the 17 members on the probe committee have strongly urged the government to revise the mandate.

“I will not give up,” one mother said, her voice quivering as tears rolled down her cheeks. “I will not allow myself to see my son in heaven and tell him that I’m sorry.”

“I will make sure I’m able to look him in the eyes and tell him that I did my part.”