With these seemingly random items that can be found inside our refrigerators, a star chef could whip up a dish befitting a five-star restaurant.

Now, a TV show in Korea is turning this into a reality, as professional chefs use humble ingredients to create delicious dishes in just under 15 minutes, leaving both the show’s participants and viewers drooling for more.

Every week, cable channel JTBC’s popular cooking program, “Please Take Care of My Refrigerator,” brings in items from the refrigerators of Korean guest celebrities and asks six professional chefs to cook new and creative dishes on the spot using only the ingredients that come “straight from the fridge.”

The JTBC program is not alone in appealing to generations of busy Koreans for whom home cooking is often put on the backburner.

Their lifestyle embodies the ultimate old-fashioned way of living, as actor Cha Seung-won assumes the role of the cooking supermom, Yoo Hae-jin becomes the hunter-gatherer father and Son Ho-jun the son of the so-called “family.”

Despite airing on a cable channel, the series, which ended last week, racked up an average of 13.4 percent in viewership, the highest among all the programs aired by public and cable broadcasters during the same timeframe. 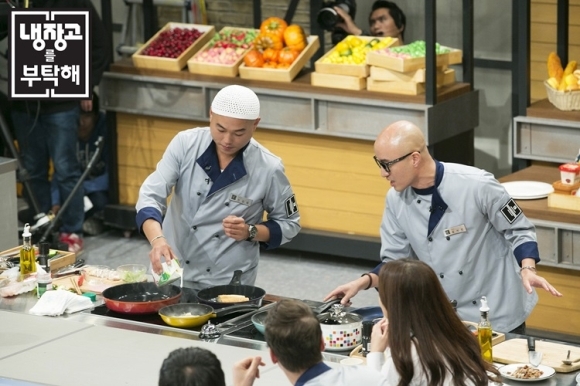 JTBC’s “Please Take Care of My Refrigerator” (JTBC)
As much as eating and cooking are universally shared values, experts say that there are standout reasons behind why these new cooking programs have managed to win over the hearts of many Korean viewers.

Cooking in the era of ‘lone living’

Changes in recent demographics are lending a hand in boosting the popularity of these new and entertaining shows.

Experts say that the rise of single-person households and the weakening of the traditional family structure are shaping a new generation of viewers who are attracted to a genre of cooking shows that can meet their needs.

“Unlike in the past, many in the young generation (those in their 20s and 30s) are living on their own as they are not getting married and forming a family of three or four ― mainly due to economic reasons,” said culture critic Lee Taek-gwang, a professor of cultural studies at Kyung Hee University.

As of 2012, single-person households made up 25.3 percent of households, with the figures expected to rise further, according to Statistics Korea.

“For those who live alone, a major part of their day involves figuring out what to eat and where to eat. Therefore, if old cooking programs were geared at teaching recipes to housewives, the current programs aim to help and encourage people who live on their own to cook,” Lee said.

“With most typical cooking shows, I didn’t think I would be able to follow the recipe and actually cook the featured dishes. However, with the recent programs I feel like I can make these dishes myself. Though I don’t cook that much, I think I now at least have the basics of cooking under handle,” said Lee Hee-yeon, a 31-year-old female office worker in Seoul.

“Three Meals a Day” has also managed to strike the right cultural chord with viewers, namely in repositioning the role of food and family in today’s lonely, overworked and worn-out generation, according to culture critic Suh Byung-kee.

“Food is a form of culture in and of itself and it transforms according to the changing societal trends. On this note, more and more people are seeking simple, home-cooked meals that are made with care and love rather than expensive, fancy meals,” Suh said.

“The popularity of the (tvN) show may be a reflection of people’s innate cravings for the simple life, in which they can just forget about their busy lives, relax and enjoy a warm meal with those they care about,” he added.

Beyond mere cooking to entertainment

New cooking-inspired programs have also received a boost by taking the genre to a whole new level, offering more than just food and cooking.

Now they go beyond simply introducing a certain dish or sharing a recipe and add entertainment to the mix by breaking expectations and fusing comedic elements into the show.

“In the past, cooking programs focused on introducing and explaining new recipes, but those programs are simply too boring for viewers to watch,” Suh said.

In “Please Take Care of My Refrigerator,” show hosts Kim Sung-joo and Jung Hyung-don of MBC’s “Infinite Challenge” provide witty commentary while the chefs frantically try to finish their dish. The six chefs, who recently earned the nickname “cheftainer,” are considered not only as cooks but also as showbiz stars who flaunt distinct personalities and humorous banter.

“The hosts look into a celebrity’s refrigerator as if they’re interrogators, providing comic relief as the cooks give professional advice about handling commonly-used ingredients and compete against each other in an entertaining setting,” Suh said.

On the other hand, watching movie star Cha in “Three Meals a Day” whip up a new dish at every mealtime also comes as a fresh shock and a new form of entertainment to viewers who are more than impressed by the actor-turned-chef’s cooking know-how.

“When I first heard about the program, I thought to myself, ‘How could a program about doing nothing but cooking and eating three meals a day in the middle of nowhere possibly be entertaining?’” said a 29-year-old female office employee surnamed Kim.

After watching Cha skillfully gut and clean fish to roll up some fresh sushi; make kimchi with freshly-harvested Chinese cabbages; bake bread and pizza from scratch in a self-made oven; and turn raw seaweed picked up from the shoreline into a dried variety, Kim said her opinion has certainly changed.

“I can now say that I would give anything to eat a meal personally cooked by Cha Seung-won, even if it had rocks in it,” she said.