The monthslong study is believed to have taken place early last year at five sites including Pyeongtaek, Gyeonggi Province; Wonju, Gangwon Province; and Busan. The statement was the U.S. military’s first official confirmation of the survey.

The Terminal High-Altitude Area Defense system would help better fend off increasing North Korean threats, the USFK said, citing the recommendation of its commander, Gen. Curtis Scaparrotti. At a forum in Seoul last June, he said that THAAD provided a “greater sensor array, better awareness of the threats and added to the interoperability of all of our systems.” 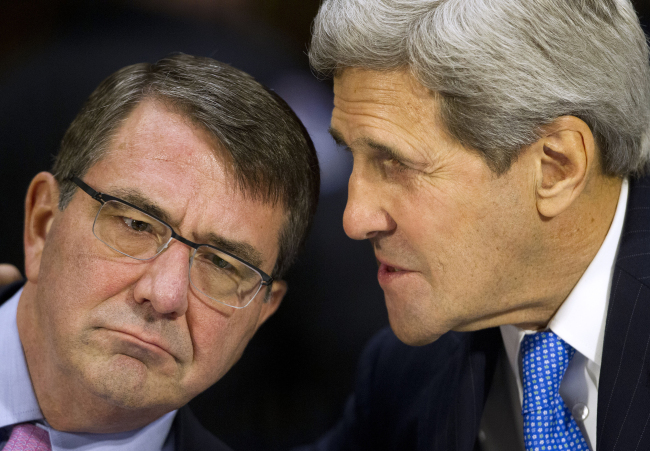 U.S. Secretary of State John Kerry (right) and Secretary of Defense Ashton Carter converse before a meeting of the Senate Foreign Relations Committee in Washington on Wednesday. (AP-Yonhap)
If the U.S. were to station a THAAD unit here, however, it would do so “in full consultation” with the South Korean government, it added.

“There are possible site locations in Korea for this system and while informal studies have been conducted to find suitable sites in the event of a possible future deployment, no decisions have been made either to deploy a system or determine where such a system might go,” the USFK said in a statement.

“A THAAD unit would provide benefits to the defense of the ROK against the North Korean missile threat by augmenting the Korean Air and Missile Defense system and U.S. Patriot systems in Korea.”

The issue will likely top the agenda for the two countries during U.S. Secretary of Defense Ashton Carter and Secretary of State John Kerry’s expected visits next month.

Carter is reportedly planning a Northeast Asia tour also including a stop in Tokyo as his first overseas outing since taking office last month, in an apparent show of Washington’s commitment to the deterrence against North Korea and its “rebalancing” policy toward the region.

Seoul could be added to Kerry’s upcoming trip to Japan as the two countries speed up preparations for a planned summit between Presidents Park Geun-hye and Barack Obama in the first half of this year, diplomatic sources say. Seoul officials are also considering a visit to Washington by Foreign Minister Yun Byung-se in the near future.

The series of high-level exchanges appears to be intended to reaffirm the two countries’ commitment to the alliance in the aftermath of a knife attack on U.S. Ambassador Mark Lippert last week.

South Korea, however, faces a dilemma as a THAAD deployment would virtually constitute its participation in the U.S.-led global missile defense program and unnerve China and Russia.

Seoul officials are divided over its stationing and have been reluctant to openly discuss it, wary of a possible backlash from the public and neighboring countries. But their ambiguous approach has fueled controversy, especially after some ruling party lawmakers renewed calls to introduce the system after the attack on Lippert.

As an alternative, the government has been developing its independent Korea Air and Missile Defense system, a low-tier, multiple-interception scheme aimed at destroying incoming missiles at altitudes of 40-50 kilometers.

THAAD is designed to shoot down short-, medium- and intermediate-range ballistic missiles in their terminal stage.