Jeong Gyu-taek, chief executive of start-up FiveGT, which produces facial recognition devices, is a South Korean tech pioneer who wants to keep the home safe and secure through biometric technology.

“Home security systems have been changing over time and in the near future people will not have to carry a bunch of metal keys or key cards as smart home systems with facial recognition technology will recognize residents as soon as they arrive at their front door,” the CEO told The Korea Herald in an interview. 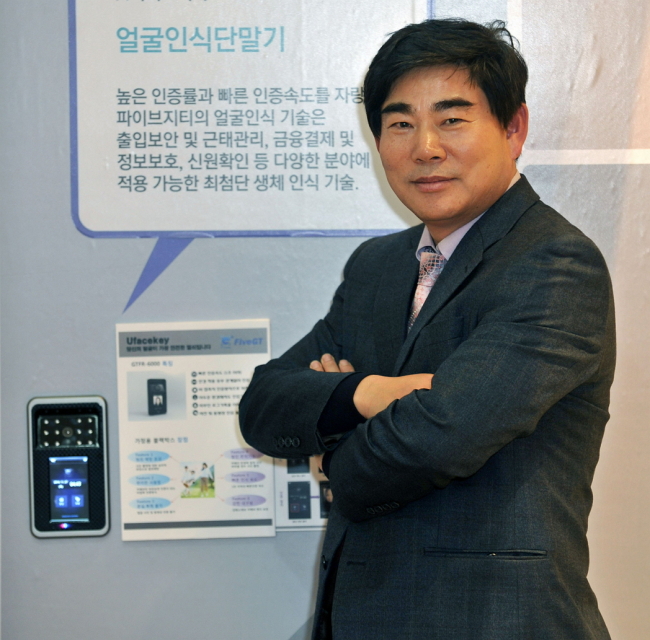 Jeong Gyu-taek, chief executive of FiveGT (FiveGT)
“Ufacekey, a facial recognition device designed for home automation systems is intuitive, fast and precise … and FiveGT also tried to make the gadget read the users’ minds,” said Jeong, who worked for 30 years at the Korean unit of Tyco International, a security systems firm headquartered in Ireland, before establishing the start-up in 2012.

The facial scanner can tell the difference between identical twins and recognize users with or without glasses.

Equipped with an infrared camera, Ufacekey can also function in darkness.

It takes the device less than 10 seconds to register a user’s facial information and less than a second for users to authenticate themselves.

As the device software keeps up-to-date facial information on users, slight changes, including weight gain, do not affect the recognition rate, according to the firm.

FiveGT has been receiving partnership offers from companies that hope to incorporate biometric solutions into their security or smart home systems.

Its current partners include the security firm ADT Caps and mobile carrier SK Telecom, which aim to incorporate the biometric scanner into their products and services.

The CEO referred to Ufacekey as a social Internet of Things device since it not only connects things with users but also helps users communicate with each other. Through Internet networks, Ufacekey can send pictures of someone who tries to enter a home to the smartphones of the residents, who can then choose whether to grant the person entry or call the police.

Family members can also share voice or photo messages through Ufacekey, and can check them upon entering their home.

With more companies paying attention to the IoT, Jeong said, the firm’s facial recognition technology will begin to play a core role in connecting things with humans in a securer manner, more than any other biometric technology.