In a parliamentary address in Tokyo, Japanese Foreign Minister Fumio Kishida pledged to continue to “clearly convey the claim and persistently respond” to the issue, calling the islets “Japan’s indigenous territory.”

He used the expression for the first time last year at the annual event as the country’s top diplomat, taking a harder line than his predecessors, including Koichiro Genba who said in 2012 that the row was “not an issue to be resolved overnight” and vowed “relentless response.” 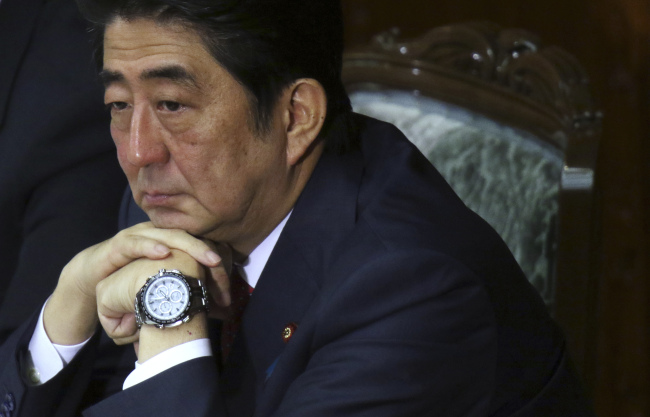 Abe (Bloomberg)
A Seoul official dismissed the assertion, reiterating the stance that the islets were Korean territory “historically, geographically and under international law.”

Kishida, meanwhile, stressed the need to improve bilateral ties, especially as the two countries are preparing to celebrate the 50th anniversary of their normalization this year.

“It is only natural for Japan to strengthen relations with South Korea, which is a most central neighbor sharing our interests of securing peace and prosperity in the region,” he added, pledging efforts to step up communications and build “multilayer partnerships.”

The territorial brawl is one of the biggest thorns in the two countries’ relations along with Tokyo’s sexual slavery involving Korean women during World War II and recurring distortion of historical facts in diplomatic and defense papers, schoolbooks and other documents.

The war of nerves is intensifying as Japanese Prime Minister Shinzo Abe is scheduled to unveil a statement on Aug. 15 to mark the 70th anniversary of the end of World War II.

While calls are growing around the world for Abe to take on a more forward-looking attitude, concerns persist over his accelerating revisionist moves given Tokyo’s review last year of the 1993 Kono Statement.