[ The Korea Herald – Send E-mail ]
[Herald Interview] Olympus Capital seeks diversification
Private equity fund eyes agribusiness, clean energy and financial services
By Korea Herald
Published : Feb 9, 2015 - 20:02
Updated : Feb 9, 2015 - 20:02
For an investor to distinguish itself in the highly competitive Asian market, the key task is to select an area of business that is neither too narrow, nor too vague.

Based on this principle, Olympus Capital Holdings Asia, a private equity firm with a focus on investing in Asia, has decided to target three sectors: agribusiness, environment and clean energy, and financial and business services.

“There is little doubt that Asia is one of the few places where one may expect sustainable growth,” Daniel Mintz, founding managing director of the company, said in a recent interview with The Korea Herald.

“But as the global capital tends to flock to Asia, it is crucial that one doesn’t get trapped in a narrow business area.” 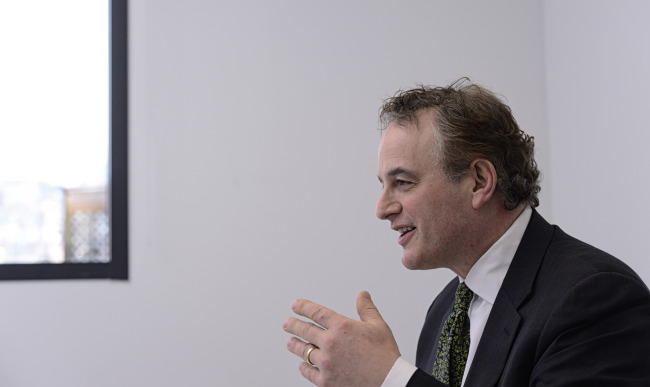 Daniel Mintz. (Park Hae-mook/The Korea Herald)
Once that specific sector becomes popular, there will be little space left for any new investment to step in, according to the official.

Since its foundation in 1997, the company has been investing more than $1.8 billion in middle-market companies across Asia. It was the second-largest shareholder of Korea Exchange Bank Credit Service before it sold the business to Lone Star in 2003.

“We tend to invest around $250 million a year, 35 percent of it in agribusiness and food, 30 to 35 percent in financial and business services, and the rest in environment and clean energy,” Mintz said.

The single largest market is, of course, China, but the company aims to keep a balanced view between China, India, Japan, South Korea and Southeast Asia, he added.

“After a series of successful investments in agribusiness in China, we were able to take that skill to other areas of Asia,” the managing director said.

Agriculture has become a complex business over the years as consumers have come to require high-quality food in mass quantity.

“For instance, information technology such as satellite imagery may be used to observe how one plants, harvests and uses fertilizers,” Mintz said.

“This is why the business could use an organized investment in order to expand its leverage and take a leap further.”

The company made a similar judgment on the environment sector, especially in water preservation.

“Many of the fast-developed countries, such as China, have paid a big price for their growth and there are now strong needs to keep the environment cleaner and to use energy more efficiently,” he said.

“We had the ability to recognize such issues and provide the necessary financing to the corresponding sectors.”

In this perspective, Korea is an ideal Asian country to invest in as it has a relatively good legal system related to the environment, the official added.

“China is only starting to apply new laws, which makes it rather difficult (for the investor) to predict the market’s moves,” he explained.

The water issue is also among the key topics that Mintz is planning to bring up at the upcoming Global Private Equity Conference, an event to be held in Washington, D.C., in May.

“Our portfolio in Korea has so far been focused on the financial services sector, but there was never a conscious decision to leave out other sectors from the picture,” Mintz said.

“What we see in Korea is a sophisticated level of education, advanced information technology and straightforward communication, which altogether make the country a good place to invest in.”

If anything more, a foreign investor could hope for more consistency and predictability in government policies and its applications of regulations, the company managing director added.

“As long as the same rule is applied over time, one may predict the consequences and rely on them in making the right decision, and this is all I would ask of policymakers here.”