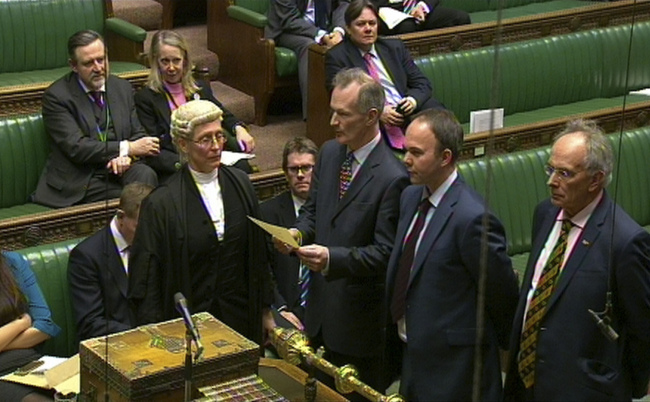 The results of the vote is returned in the debating chamber at the House of Commons in London on Tuesday. (AP-Yonhap)
Lawmakers at the House Commons voted by 382 to 128 in favor of allowing the creation of in-vitro fertilization (IVF) babies with DNA from three people, a move aimed at preventing serious inherited diseases being passed on from mother to child.

Under the change to the laws on IVF, as well as receiving the usual “nuclear” DNA from its mother and father, the embryo would also include a small amount of healthy so-called mDNA from a woman donor.

“Families who know what it is like to care for a child with a devastating disease are best placed to decide whether mitochondrial donation is the right option for them,” said Jeremy Farrar, director of health charity Wellcome Trust.

“We welcome this vote to give them that choice.”

The bill is expected to be rubber-stamped by the House of Lords, the upper chamber of parliament, later this month, paving way for the procedure to begin next year.

The change could apply to up to 2,500 women of reproductive age in Britain with hereditary mitochondrial diseases but opponents say it opens the way to the possibility of “designer babies” in future.

Mitochondrial DNA (mDNA) is passed through the mother and mitochondrial diseases cause symptoms ranging from poor vision to diabetes and muscle wasting.

Mitochondria are structures in cells which generate the energy that allows the human body to function.

Health officials estimate around 125 babies are born with the mutations in Britain every year.

The law will allow Britain’s Human Fertilisation and Embryology Authority to authorize the procedure and a pioneering research center in Newcastle is expected to be the first where it would take place.

“We have finally reached a milestone in giving women an invaluable choice, the choice to become a mother without fear of passing on a lifetime under the shadow of mitochondrial disease to their child,” said Robert Meadowcroft, Chief Executive of the Muscular Dystrophy Campaign.

John Tooke, President of the Academy of Medical Sciences, said he was “delighted” by the vote.

“These treatments could reduce the number of children born with rare mitochondrial diseases, and help dozens of families to lead happy and healthy lives.

“Today’s vote is the culmination of many years of scientific and public debate.”

But many Britons are still against the proposed change despite years of consultation by health authorities with the public and the scientific community.

A poll by the ComRes market research agency in the run-up to the vote showed only 20 percent of respondents in favor of the change and 41 percent against, while 39 percent said they had no view either way or did not know.

Opponents include scientists and religious leaders.

David King, director of the watchdog group Human Genetics Alert, said: “If we want to avoid the nightmare designer baby future we must draw the line here.”

Josephine Quintavalle from the pro-life organization Comment on Reproductive Ethics said there should be more focus on finding cures “which do not rely on destructive manipulation of early human life.”

The Roman Catholic Church is firmly opposed to the move, pointing out that it would involve the destruction of human embryos as part of the process.

The Church of England has also said that ethical concerns “have not been sufficiently explored.”

There is also concern on purely scientific grounds.

“It is essential to analyse offspring to determine that no abnormalities appear at least during early life,” he said in a statement last week.