Tokyo has long avoided getting embroiled in tinderbox conflicts across the Middle East and is rarely the target of religious extremism, something many ordinary Japanese see as a faraway problem.

But the dangers came into focus after IS militants on Saturday posted a video in which they claimed to have beheaded Japanese war correspondent Kenji Goto, after last week saying they had killed another hostage, self-styled contractor Haruna Yukawa. 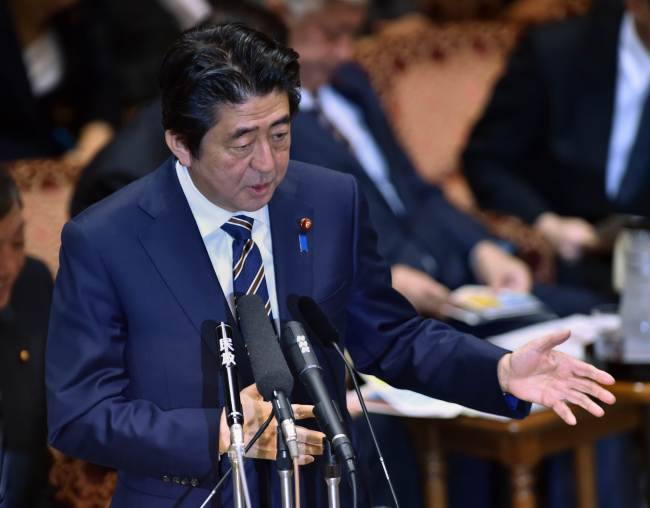 Japanese Prime Minister Shinzo Abe. (AFP-Yonhap)
The drama erupted after Abe pledged $200 million in aid for refugees fleeing IS-controlled areas during a tour of the Middle East last month ― militants had demanded the same amount in exchange for the pair, whom it had been holding for months.

The IS video warned the killings marked the start of a “nightmare for Japan” and its “reckless” government.

“People thought Japan had little to do with Middle East and the Islamic State has nothing to do with Japan,” said Tomoaki Iwai, a politics professor at Nihon University.

“Now, people realize that terrorists can be anywhere and they can target anyone, Japanese or not.”

The shift has raised fears it could pull Japan into military conflicts that it had previously avoided, including the US-led fight against IS.

The group rules swathes of Iraq and Syria under an extreme form of Islamic law, and has killed both locals and foreigners ― including two U.S. journalists, an American aid worker and two British aid workers.

The hostage crisis may force Abe to “tone it down a little”, said Takehiko Yamamoto, professor emeritus at Japan’s Waseda University and vice president of the Center for Contemporary Islamic Studies in Japan.

“This ... has been a great shock to the public, and a majority of people may feel that Japan should keep a low profile rather than becoming more vocal on global issues, which could pose risks to Japanese citizens,” he said.

The Japanese public, usually isolated both geographically and politically from overseas conflicts, have been left reeling by the round-the-clock news coverage of the crisis and frightened that it could signal more violence against nationals overseas.

“It is so frustrating, so disappointing,” said 80-year-old Hideko Kamijima.

“I cried over it this morning. I couldn’t hold back my tears.”

Maki Sato, secretary-general of the nonprofit Japan Iraq Medical Network, said the incidents would do little to convince a wary public on the merit of Japan’s wider involvement overseas.

The 2011 Fukushima quake-tsunami disaster turned the public gaze inwards, with people more preoccupied by the nuclear catastrophe at home, he added.

“Ever since the huge earthquake disaster, I think Japanese people have become less interested in the world affairs,” Sato said.

But the captured pair’s decision to visit a violence-plagued region has also tempered the public’s sympathy, added Iwai from Nihon University.

“They were no ordinary tourists, so the impact of the news might have been lessened to a certain degree,” he said.

The hostage crisis appears to have done little to sway Abe’s resolve to change Japan’s status as diplomatic bit player.

On Sunday, a visibly upset Abe denounced the claims that Goto had been killed, slamming it as a “heinous and despicable” act, and vowed not to back down in the face of threats.

“We will never forgive terrorists,” the premier, who appeared on the verge of tears, told reporters after news of the video broke early Sunday in Japan.

Since sweeping to power in late 2012, Abe has embarked on a high-octane diplomatic offensive. He has visited more than 50 countries, including oil-rich Gulf nations, to promote Japanese infrastructure and forge partnerships as he tries to build an economic and defense counterweight to China.

“It could be problematic for Abe if the hostage-takers deliberately used his visit to the Middle East and Israel to publicize the crisis. That directly touches on the cost and risks of a greater diplomatic presence,” Iwai said.

“When he originally announced (the aid), he said the money was to help countries ‘contending with IS’. Was that a wise way to phrase it?”

The Japanese public has also yet to be captivated by Abe’s move to deepen Tokyo’s military alliance with the United States and ease self-imposed rules on arms exports.

“Japan’s (aid) assistance has been greatly appreciated and we need to continue that. Japan should do what it does well, helping people in need and avoiding a military role,” Sato said.