[ The Korea Herald – Send E-mail ]
Keeping your car as a life companion
Old, used cars transformed into art pieces for new exhibition
By Lee Woo-young
Published : Jan 29, 2015 - 21:13
Updated : Jan 29, 2015 - 21:14
Kim Young-gyui had spent nearly 16 hours a day in a car for the past 30 years. The 66-year-old veteran taxi driver rode about 750,000 kilometers, more than twice the distance an average car travels in its lifetime. Recently, he had to bid farewell to his car upon retirement and was about to send it to a junkyard to be scrapped.

As luck would have it, he got a chance to keep his faithful companion with Hyundai Motor’s campaign “Brilliant Memories” that transforms old, used cars into objects that owners can keep for the rest of their life. 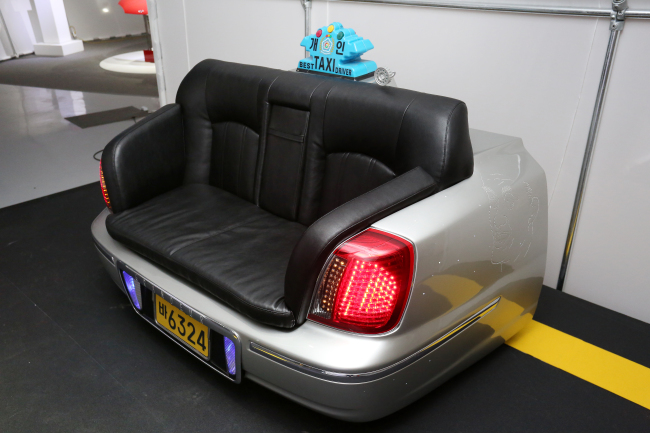 “Mr. Taxi” by Khan. (Hyundai Motor Co.)
Kim’s sedan was converted into a couch in the hands of artist Khan, whose previous works involved real automobiles and making their renditions.

The passenger seat of the taxi is now Kim’s private couch. He can now relax on what used to be the back seat of his taxi, listen to the radio on the old car’s audio sound system, sip a cup of coffee and put it in the coffee cup holder. His head portrait is engraved on the polished surface of the car with the LED lighting installation underneath the metal panel.

The couch is on display with other car-turned-artworks at the exhibition by Hyundai Motor Company at Dongdaemun Design Plaza in Seoul. 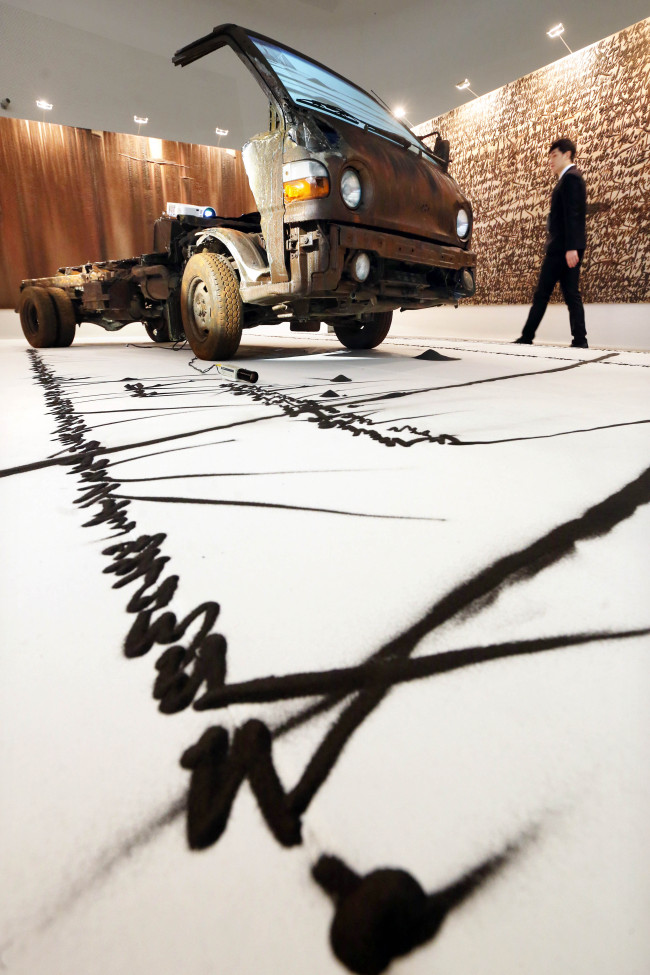 An installation view of artist Kim Jong-ku’s artistic rendition of the Hyundai Porter pickup truck. (Hyundai Motor Co.)
Last year, Hyundai Motor collected stories from drivers of Hyundai cars who plan to sell or scrap their old cars as part of a campaign that highlights emotional aspects of driving. The company selected stories that describe cars as life partners and friends and had artists turn old cars into artworks and objects that owners can keep as a memento. Fourteen artists participated in the project, recycling car parts and transforming them into art pieces and objects drivers can keep as a reminder of the time with their cars. The artworks will be included in the art collection of Hyundai Motor Company. The objects such as a couch, luggage carrier and audio system will be given to the car owners.

Renowned artist Lee Yong-baek, who represented the Korean Pavilion at Venice Biennale in 2011, created two pieces of works from a Porter pickup truck belonging to a deliveryman. The driver spent most of his days in his pickup truck to deliver products, eat meals between delivery schedules and listen to music during his break. Having used it for a decade, the driver decided to change to a new car.

Artist Lee made a cast sculpture of the truck, broke it into parts and reassembled them into a new sculpture. In tribute to the deliveryman’s hard work, Lee made an audio set decorated with the floral print image of his work “Angel Soldier” and equipped it with a better sound system.

“I wanted to give the couple (the delivery man and his wife) an audio system after I heard their story of listening to music through the in-car audio system and planning their life together,” said Lee at the opening of the exhibition on Tuesday.

Another Porter pickup truck inspired artist Kim Jong-ku to conduct a live performance on Tuesday using the ground metal powder from the car parts. As respect to the farmer whose whole life was about raising Korean yellow melons and selling them across the country, Kim wrote down his life story with metal powder on the white floor as a poem.

Artist Yang Soo-in created a car swing using the midsized sedan Sonata II, which belonged to an office worker-turned filmmaker. Yang made the car move back and forth like a swing and invited the audience to get on. Once visitors close the door, a voice is heard, asking them to answer random questions about their personal life. The artist said he intended to give the owner an inspiration for his future movie work.