[ The Korea Herald – Send E-mail ]
[Newsmaker] Kim faces tough choice over overseas trips
By Korea Herald
Published : Jan 27, 2015 - 21:36
Updated : Jan 27, 2015 - 21:49
North Korean leader Kim Jong-un is facing a tough diplomatic decision over when and where to make his international stage debut ahead of a series of foreign events this year, including Russia’s 70th anniversary celebration of the victory in World War II.

The decision calls for Pyongyang’s careful calibration of strategic interests amid diplomatic estrangement from China, Russia’s engagement with the North, the U.S.’ harsh criticism of its cyberattacks and military threats, and an impasse in inter-Korean relations.

Kim is expected to visit Russia in May for the ceremony to mark the victory anniversary ― with Russia’s presidential office telling Voice of America that Pyongyang has confirmed his attendance ― to which South Korean President Park Geun-hye has also been invited. Park has yet to decide whether to accept the invitation.

Attention is now focused on whether Kim will really opt to travel to Russia in a move that would ignore the dynastic regime’s tradition of paying a visit to China, its longtime patron, first to underscore its diplomatic priority. 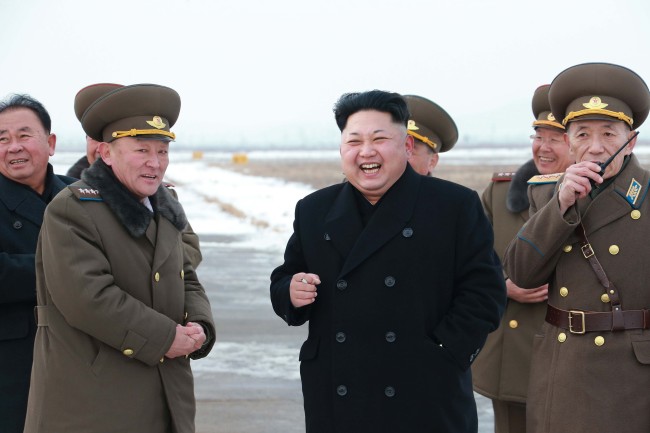 North Korean leader Kim Jong-un. (Yonhap)
Highlighting the strained ties between Beijing and Pyongyang, the leaders of the two countries have yet to hold a summit. But South Korean President Park and Chinese leader Xi Jinping have met for one-on-one talks six times. Park also had a top-level meeting with Chinese Premier Li Keqiang once.

Observers say that Kim’s decision to travel to Russia first would further undermine Pyongyang’s relations with Beijing, which have recently been worsening due to Pyongyang’s provocative policy choices including nuclear and missile tests.

Some argue that the North could use Kim’s trip to Russia to raise pressure on China to pay more attention to supporting the isolated regime, and to show Beijing that Pyongyang could employ a diversified diplomatic strategy to seek more autonomy and reduce its reliance on China.

On the part of Russia, Moscow can make its May ceremony a high-profile international event with the presence of the internationally-criticized dictatorial ruler of the world’s most isolated state, and the possibility of the first inter-Korean summit since 2007, observers noted.

By inviting Kim to the ceremony. Russia can also create more diplomatic leverage with Pyongyang, while its engagement with the North could highlight the scant progress in U.S. efforts to bring about a change in the North, which commentators called a “policy of strategic patience.”

Amid much talk of Kim’s trip to Russia, speculation is also rising over the possibility of Kim’s trip to Jakarta, Indonesia, in April, where the Asian-African Summit is scheduled to take place from April 22-23.

Given that a Chinese leader may attend the summit, Pyongyang could utilize it to hold a long-awaited summit with China, analysts said.