Holograms and virtual reality technologies are being increasingly deployed as an alternative to live performances as Seoul seeks to entertain the burgeoning group of K-pop fans visiting the home country of their idols.

Although it may sound creepy to some, hologram concerts and virtual spaces where fans can digitally interact with their idols are a real business here, with the government planning to invest 240 billion won ($222 million) by 2020 to nurture related industries.

“Holographic concert venues are a wonderful example of the creative economy, as they combine K-pop, the mainstay of hallyu, and digital technologies to create a new revenue source,” said Yoon Jong-rok, vice minister of Korea’s Ministry of Science, ICT and Future Planning.

Illustrating how K-pop embraces futuristic technology is SMTOWN@coexartium, which SM Entertainment, one of the country’s top K-pop idol generating agencies, opened with much fanfare earlier this month. 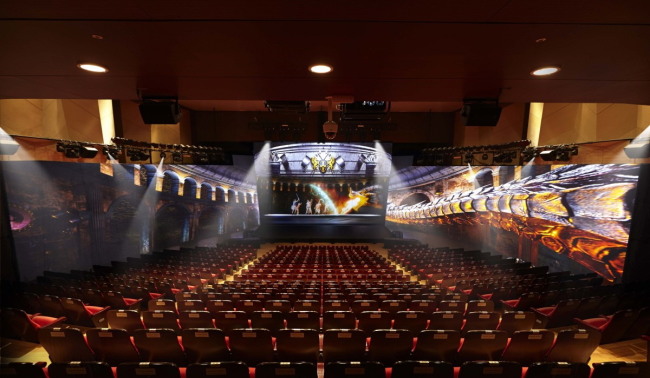 The interior of SMTOWN@coexartium’s hologram theater. (SM Entertainment)
Located in Samseong-dong, southern Seoul, the five-story complex is a one-stop shop for all things SM Entertainment, K-pop memorabilia and the latest in hologram programing.

Opened on Jan. 14, the complex is a K-pop fan’s paradise come to life, with every inch of the space oozing K-pop splendor. Not surprisingly, it has already become a must visit site for K-pop pilgrims.

Much more than just a location to purchase albums, the building features an in-house virtual reality studio, a cafe, a K-pop merchandise shop and a hologram theater.

One of the complex’s main attractions is the SMTOWN Studio, a virtual space where guests can experience first-hand what it’s like to be a star.

The studio allows visitors options to receive a total makeover prior to a professional photo shoot. Fans can also have the one-of-a-kind chance to meet their favorite SM artists ― or more precisely, their digital reconstructions ― through vocal and dance training sessions and music video shoots. In less than a week of opening, studio reservations for all of January had been completely booked, according to a staffer at SMTOWN.

In the hologram theater, visitors can watch holographic concerts of their favorite SM artist, such as Girls’ Generation, Super Junior, TVXQ, EXO and SHINee, or enjoy the world’s first hologram musical “School OZ.”

The complex also houses the SUM celebrity merchandise shop and the SMTOWN LIVErary Cafe, which features a music lounge and a K-pop themed dessert bar.

YG Entertainment, SM’s archrival and home to such monster K-pop acts as Psy, Big Bang and 2NE1, has been running hologram concerts of its artists at the world’s first hologram concert hall in Seoul since last year.

Established in partnership with telecom firm KT, Klive in Dongdaemun, Seoul, has attracted more than 50,000 visitors as of December, most of them foreign. It runs four concerts featuring YG artists every day except Monday.

KT said it plans to open more Klive Halls in Seoul, on Jejudo Island, and in China.

YG is also planning to spend 100 billion won to set up a K-pop culture cluster site in Uijeongbu, northeast of Seoul, by December 2018.

Covering 49,600 square meters, the envisioned complex will consist of a handful of concert stadiums, multiplexes and merchandise shops, featuring plenty of futuristic technology.