But increasingly, Korea’s winter beaches are being warmly greeted by surfers seeking thrills and fun in the billowing winter waves. The hard-core surfers paddle out in the cold water to catch biggest waves of the year.

Surfing is not a popular sport in Korea although the three sides of the peninsula are surrounded by sea. The surfing population is no match for that in Hawaii or the Philippines. But more people are visiting winter beaches in Korea in search of the exuberance winter waves offer.

Yoon Seung-hwan, 34, has been surfing at Jukdo Beach in Yangyang, Gangwon Province, for three years. He prefers to surf in the coldest months of the year because the crowds are smaller and he can enjoy the big waves by himself. 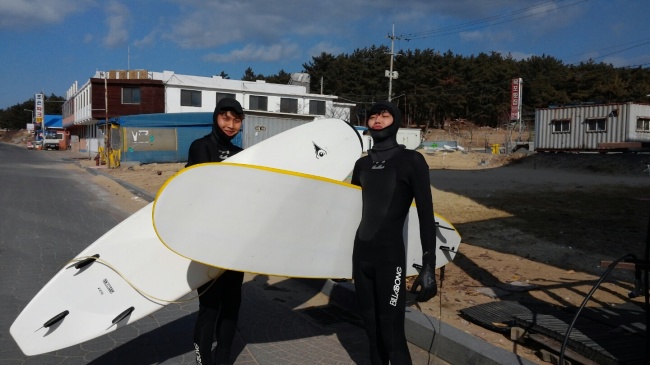 Surfers get ready to catch the waves at Mallipo Beach, Taean, South Chungcheong Province. (MLP Surf)
“The waves are just better (in winter). The summer beach barely has waves big enough to ride on as the currents coming from the south has the tide weaken by the time it reaches the east coast of the Korean Peninsula,” said Yoon.

The waves are from 1.5 meters to 2 meters high on average at Jukdo Beach in the winter. The beach is a popular winter surfing spot that draws 20 to 50 surfers a day, depending on the size of the waves.

Yangyang remains a popular surfing destination for Koreans year-round. It was the host city of the International Surfing Festival last year.

“Winter is the best surfing season for seasoned surfers who can control the wave and are fit enough to stay in the cold water for a long time,” Kim explained. He recommends for beginners to learn surfing in summer and practice throughout the warm months, and catch the “fun” strong winter swells when they are ready.

Winter surfing requires a few precautions and the right gear to keep the body warm. The water temperature can drop to 5 to 8 degrees Celsius at Jukdo Beach. Surfers are advised to stay in the water from 30 minutes to three hours and get out to warm their body. 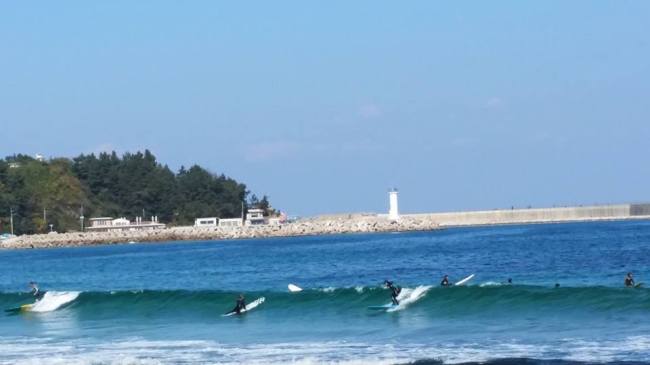 Surfers catch a wave off Jukdo Beach in Yangyang, Gangwon Province. (Courtesy of Yoon Seung-hwan)
They have to wear a full-body suit along with gloves and boots. Suits come in two types ― a neoprene wet suit and a dry suit. The neoprene wet suit keeps a thin layer of water between a surfer’s body and the suit and prevents a surfer from losing too much heat. The dry suit, waterproof and customized to fit a surfer’s body, is tight and warm. A custom-made dry suit can cost from 700,000 won to 1 million won ($645 to $920).

Mallipo Beach on the west coast has emerged as another popular winter surfing spot. Lee Hyoung-ju, owner of MLP surf shop, said the beach is better for beginners as the water is shallow.

“You can walk with your feet touching the bottom for 10 meters. The waves break more slowly so surfers can catch and enjoy waves longer,” said Lee.

But surfers should be ready for water temperatures as low as 1 to 2 degrees Celsius ― the coldest among beaches in Korea, according to Lee. He had three first-time surfers last week. The water was too cold for a female surfer so she decided to wait for the warm season.

Lee sees more than 20 surfers visit the beach on weekends, including office workers taking a day off from work.

When the waves are reported to be good, surfers flock to this beach regardless of the day of the week. Surfers check the size of the waves through wind forecast mobile applications before they hit the road. Some serious surfers even check the weather forecasts in Japan and calculate the size and speed of the waves based on the weather patterns in the neighboring country.