Additionally, the development of land to be vacated by the U.S. military base in Yongsan and the former site of the state-run Korea Power Electric Corp. in Gangnam will be pushed in earnest.

The government announced Sunday its plan to foster a business environment to induce more than 25 trillion won ($23.2 billion) in investment by Korean companies to boost the tourism industry and corporate competitiveness.

Officials said the plan was formulated by ministries and agencies including the Finance Ministry, the Land Ministry and the Tourism Ministry.

“We hope that this plan will help lay the groundwork for the development of new industries and improve the corporate investment climate,” Deputy Finance Minister Jeong Eun-bo said at a press briefing. 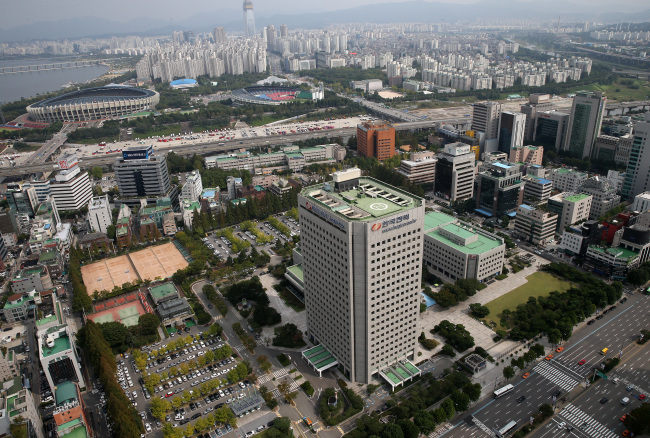 (Yonhap)
The government established the plan as corporate investment, which contracted for five straight quarters since the first quarter of 2012, started to show signs of recovery in the second half of 2014.

Despite these gains, policymakers stress that Korea’s economy remains fragile due to downside risks and weakening corporate profit margins.

Among the four mega projects, there has been progress in negotiations between the Seoul city government, the Defense Ministry and Korea Land and Housing Corp. on developing the U.S. 8th Army’s sprawling Yongsan garrison in the capital, Jeong said.

There will also be government support for the development of land in southern Seoul that was used as the headquarters of Korea Electric Power Corp. and to relocate KEPCO’s auxiliary facilities for a large cogeneration plant, he said.

The Yongsan land project involves 5 trillion won worth of investment on the site that will be vacated by the U.S. military.

“The goal is to get development authorization by April so investment can be made in the second half of this year for the land currently occupied by the United Nations Command,” the official said. Most military facilities in Yongsan are to be consolidated in Pyeongtaek, Gyeonggi Province, by 2016.

“The goal is to allow development to begin as early as 2016,” the senior official said.

Industry watchers expect Hyundai to submit its building plan, estimated to require 5 trillion won in funds, around March for approval.

Regarding fresh investments, the finance and culture ministries said 1 trillion won worth of funds would be available at low interest to construct 5,000 hotel rooms by 2017. This move is expected to allow the country to meet the sharp rise in the number of foreign tourists, which reached 14.2 million in 2014.

Besides hotels, policymakers said four new duty-free shops would be opened in Seoul and on Jejudo Island, while two new integrated resorts with casinos, theme parks and accommodation would be authorized.

“Limits imposed on the building of new resorts with casinos will be lifted so they can be built even inside free economic zones by both local and foreign investors,” said Park Min-gwon, deputy minister for the Tourism Ministry.

Each resort will draw in at least 1 trillion won in new investments, he said. The casinos, however, will only be open to foreign tourists.

The Land Ministry said related laws would be changed to allow various facilities to be built on scenic shorelines to attract tourists. Some 5 trillion won could be invested to enlarge Pangyo Techno Valley in Gyeonggi Province by at least two-thirds.

In addition, the ministry said it hoped to designate six new high-tech urban industrial centers and foster the growth of the aircraft maintenance, repair and overhaul sector by allowing foreign companies to hold a majority stake in such companies. The MRO sector could attract some 500 billion won in investment.

The master plan includes 20 trillion won in funds this year for loans to tech-oriented companies, up from 8.9 trillion won last year. There will also be a 500 billion won “China fund” to help local companies enter the Chinese market once the free trade agreement with China is ratified, the government said.