But even with Lotte founder Shin Kyuk-ho’s temporary favor, his older brother’s presence will likely push the 59-year-old chairman to prove his management aptitude in order to impress his 93-year-old father, who is known to mix business affairs with succession plans.

On Tuesday, chairman Shin met with Korean reporters at Gimpo International Airport upon returning from Japan and said he did not know anything about the succession plan. He said his older brother Shin Dong-joo’s recent departure from all executive positions at Lotte’s Japanese units was “in accordance with his father Shin Kyuk-ho’s wishes.”

Dong-bin said his visit to Japan had simply been to discuss the future direction of the Chiba Lotte Marines baseball team, which he owns.

On Wednesday, he held an executive meeting and stressed that his only focus was Lotte Korea. “When the chairman says he does not know, it means ‘no,’” a Lotte official said. 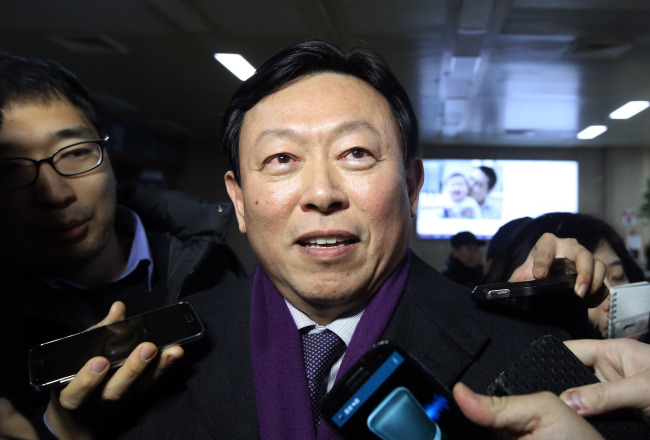 Shin Dong-bin. (Yonhap)
Nevertheless, many believe that Dong-bin will try to take control of the business in Japan.

He has met with Lotte Holdings CEO Takayuki Tsukuda and rumors are rampant that they have discussed business. Considering that Dong-bin has led the success of Lotte Korea, this would be the best time for him to receive the seal of his father’s approval, observers say.

Lotte Korea started as an affiliate of Lotte Japan in 1967 and grew into an even bigger business conglomerate after seeing success in the retail, hotel and petrochemical industries here, among others, while the Japanese unit focused on the snack-making business.

Lotte Korea reported 83 trillion won in sales for 2013, with its Japanese sister achieving less than 6 trillion won in sales. The company has recently started operating the gigantic Lotte World Mall in southern Seoul, added duty-free shops to its lucrative overseas business portfolios and unveiled plans to open multiple shopping malls in Southeast Asia including in Vietnam and Indonesia. The hard-driving Dong-bin is expected to bring his magic touch to the Japanese sister companies.

“Until Shin Kyuk-ho officially retires and inherits his company stakes, the succession competition will linger. Shin Dong-joo still has considerable shares in both the Japanese and Korean businesses, which will make it hard to predict the future. Therefore, Dong-bin will be pressured to show some progress to impress his father,” an onlooker said.

Until recently, it had been widely believed that Dong-bin, who is a year younger than Dong-joo, would take over Lotte’s Korea units while the elder brother would take over the Japanese businesses. The brothers have similar stock holdings in Lotte affiliates ― Dong-joo has a slightly higher portion in Japanese units and Dong-bin has a marginal lead in Korean businesses.

However, since Lotte Holdings holds the lion’s share of stocks in Lotte Hotel, which serves as the de facto holding company of Lotte Group here, Dong-joo had been expected to be the eventual successor of both Lotte Korea and Lotte Japan. But at the end of December and early January, Dong-joo was fired from all his management positions with major Lotte affiliates, with offices of both companies declining to discuss the details.