[ The Korea Herald – Send E-mail ]
[Herald Interview] Mastering both sides of the camera
Actor Ha Jung-woo directs, stars in heartwarming film adaptation of Chinese novel
By Korea Herald
Published : Jan 14, 2015 - 19:36
Updated : Jan 14, 2015 - 19:36
Actor Ha Jung-woo has done an ample amount of diverse, interesting films during his acting career spanning a decade. From a ruthless serial killer in “The Chaser” (2008) and a hopeless romantic novelist in “Love Fiction” (2012), to the most recent, a butcher-turned-bandit in “Kundo: Age of the Rampant” (2014), he has become a household name in the local film industry, characterized by his unique, down-to-earth flair.

Seemingly at the peak of his acting career, the 36-year-old recently took another leap of faith as he helmed the film adaptation of a best-selling Chinese novel. It is his second film to direct after his directorial debut comedy “Fasten Your Seatbelt” in 2013.

“‘Fasten Your Seatbelt’ was very personal, funny in my own selfish taste,” reflected Ha on Tuesday during an interview with the Korea Herald at a cafe in Samcheong-dong, central Seoul. “I couldn’t do that again. This time, I was determined to make a good story and communicate with other people together.”

The result is the drama flick “Chronicle of a Blood Merchant” based on renowned Chinese author Yu Hua’s 1995 eponymous novel. 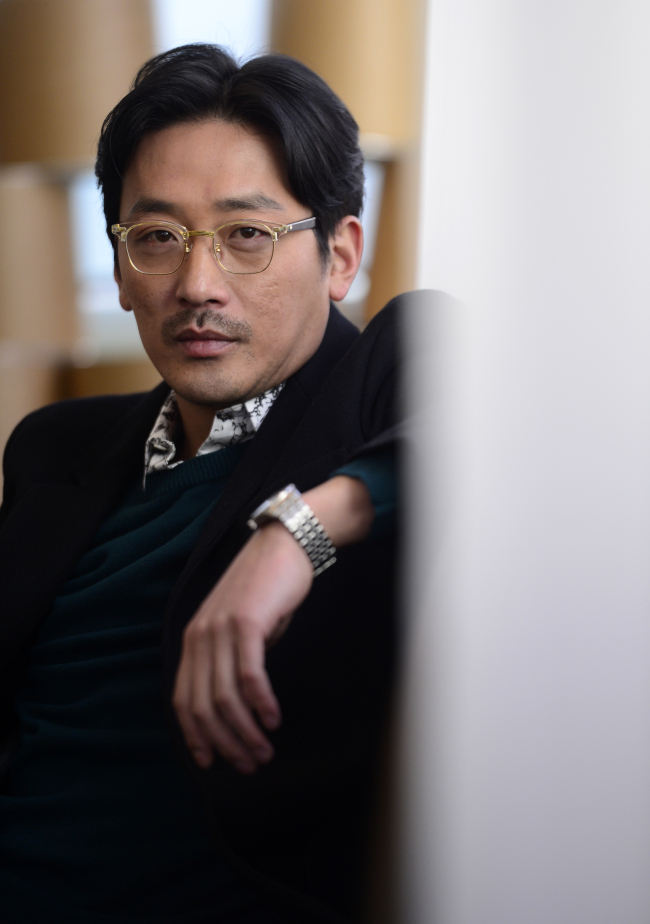 Actor-director Ha Jung-woo poses before an interview with The Korea Herald in Samcheong-dong, Seoul, Tuesday. (Park Hae-mook/The Korea Herald)
Ha not only wrote and directed the film, but also played the protagonist Heo Sam-gwan, a poor but good-hearted man who sells his blood to earn money, in order to win the heart of the most beautiful girl in the village, Heo Ok-ran (Ha Ji-won).

“When I first read the book, I thought Heo Sam-gwan was a very multidimensional character,” said Ha. “He emanates vitality and humor.”

In the beginning, he was only offered to play the role of the protagonist. But later, the producers asked Ha to helm the film. “My heart was beating, and I had a feeling that if I do this film, I will learn something really meaningful in life,” said Ha. “I just had to do it.”

That is how it all began.

It must have been a difficult job to seesaw between being in front of and behind the camera ― it is challenging enough to fulfill even one side of the job.

“Would I, as an actor-director, be able to objectively evaluate my own acting?” This was his main concern, in addition to making a two-hour film from such an extensive and well-respected classic.

Ha’s only solution was to copiously prepare for the production.

“The preproduction period, which requires carefully designing and planning every step of filmmaking, was difficult,” he said.

Ha, known as a workhorse actor in the industry, took every step possible to prepare for the film. He visited the shooting venues several times and acted each scene out for the screenwriter who was creating the storyboard. Ha also hired stand-ins to demonstrate the scenes and filmed 40 percent of the rehearsals to study the scenes prior to shooting.

He even filmed more takes for his parts to avoid any mistakes.

The actor admits that sitting in the directorial chair requires more responsibility, “and also cutting down on sleeping and less free time during shooting.” Yet, he is very grateful for the opportunity to do both.

Despite his limitless success on screen, the actor admitted to falling into a rut after 10 years of acting. His passion and initial excitement were slowly wearing out.

“It is the same for actors. Once you start working to make a living, acting follows the same pattern of going back and forth from work to home every day,” said Ha.

“I needed some time off from my work to search for myself.”

Luckily, it was during this time that he had the chance to helm his directorial debut.

“I realized, in order to become a better actor, I had to delve deeper into the film and learn about it,” said Ha, explaining his foray into directing. “By learning about the film, I could overcome my fears and get out of the rut.”

He also got to understand what the director’s role entails.

“For me, the director’s role is to leave the chair empty for other crew members to collaborate together,” said Ha. “As a leader and a person in charge, I am creating a venue for actors and crew to exhibit their full capability and potential.”

“That is the role I can play, as I am still at a developing stage (as a director),” said Ha, who plans to continue standing on both sides of the camera.