[ The Korea Herald – Send E-mail ]
Heartthrob Lee Min-ho to show ‘inner cruelty’ in new film
By Korea Herald
Published : Jan 14, 2015 - 19:32
Updated : Jan 14, 2015 - 19:32
After stealing the hearts of many Asian girls with his modern-day Prince Charming roles in the TV series “Boys over Flowers” and “The Heirs,” actor Lee Min-ho is about to reveal his cruel, charismatic side.

In the upcoming film “Gangnam 1970,” he plays an impoverished orphan-turned-mobster in a tale of money, violence and betrayal set against the tumultuous history of real estate development in what is now Seoul’s most affluent district.

The noir action flick is the final installment of director Yoo Ha’s “street series” trilogy about gangsters, following “Once Upon a Time in High School” (2004) and “A Dirty Carnival” (2006).

“I haven’t really played a lot of impoverished characters. Mostly I’m depicted as that guy from a really rich family,” Lee said during a news conference for the film in Seoul on Tuesday. 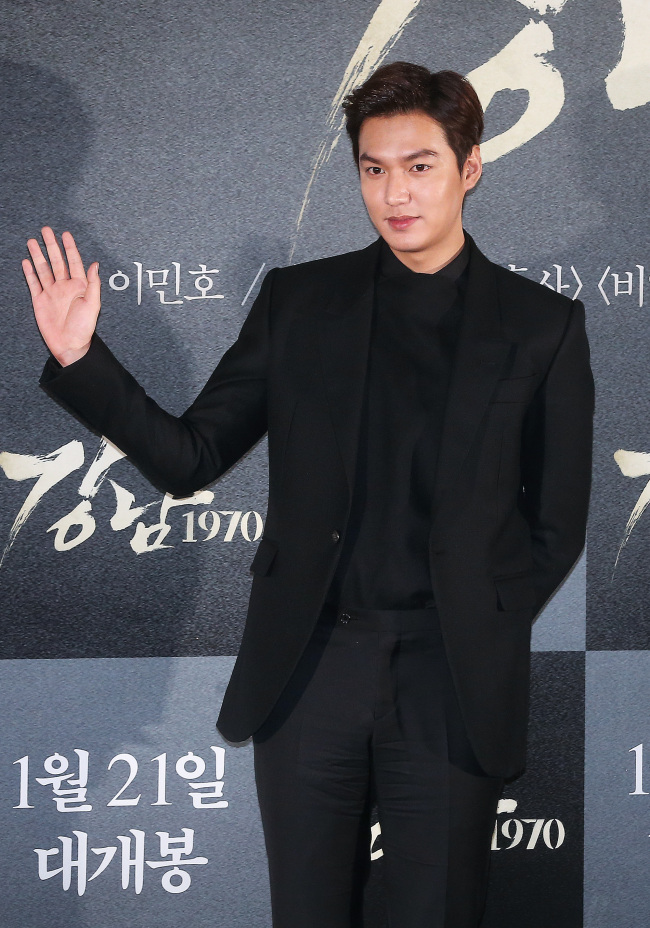 Lee Min-ho poses at a news conference for his new film “Gangnam 1970” in Seoul on Tuesday. (Yonhap)
Ridden with bloodshed and brutal murder scenes, “Gangnam 1970” portrays two brothers’ struggles amid the sociopolitical turmoil and corruption of the 1970s in South Korea. Actor Kim Rae-won stars as Lee’s brother.

“I think there is a sense of violence deep inside all human beings,” Lee said. “Playing this role, it was the first time I had to tap into my own inner cruelty. It was definitely mentally grueling.”

While Lee has had minor roles in such films as “Public Enemy Returns” and “Our School’s E.T.,” this was his first lead role.

“It is my first time playing a lead on the big screen,” said the actor, who shot to stardom across Asia in 2014 with the TV drama “The Heirs.”

It will also be distributed across Asia, including in China, Thailand, Singapore and Vietnam. According to the distributor Showbox, the movie will also be shown at the European Film Market that begins in Germany on Feb. 5.