In a joint policy briefing for Park led by the Ministry of Strategy and Finance, six state agencies, including the Labor Ministry and the Land Ministry, said they would push forward with the government’s three-year reform plan to restructure public enterprises, adopt new labor systems and implement fiscal policies to fuel growth and boost the livelihoods of the middle class. The agriculture and oceans ministries and the Fair Trade Commission also joined the briefing.

“Although public enterprises have reduced debt and employee benefit packages, the people are still not satisfied with their productivity and efficiency,” Park told the ministries. 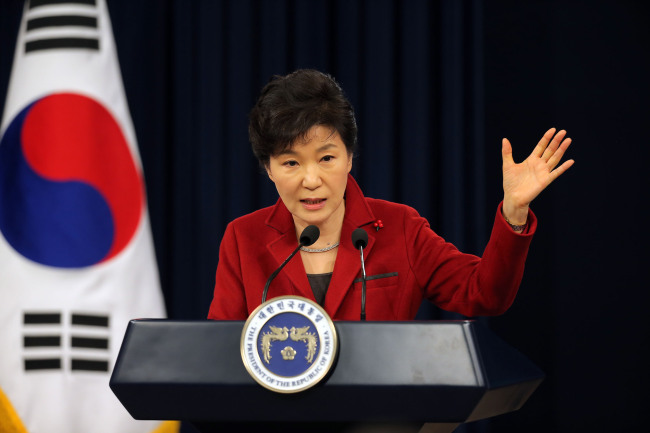 President Park Geun-hye
“I urge the Finance Ministry to lead other ministries to actively push forward reforms in the public sector without retreating and causing a ‘yo-yo syndrome.’”

The Finance Ministry said that it would further push state-owned enterprises to reduce debt and completely root out reckless management, and either merge or shut down overlapping businesses by 2016, a year ahead of its initial schedule.

Park also called for ensuring flexibility in the labor market, saying reform in the sector was the most important task for building a strong economy under the three-year economic reform plan aimed at boosting the annual growth rate to 4 percent and achieving more than $40,000 per capita income.

“We will closely evaluate the functions and businesses of public enterprises on whether they are appropriately aligned with the world’s trends, and seek to convert them to focus on core assets as a means of raising productivity and efficiency,” Vice Finance Minister Joo Hyung-hwan told the press.

He added that the government would move to allow irregular workers to easily gain regular status based on their performance and skills in the public sector as part of the efforts to boost labor market flexibility.

The Land Ministry said measures would include guaranteeing profit margins of above 5 percent for private home-rental companies, and raising tax cuts from 25 percent to up to 50 percent for acquisition taxes for private companies that buy houses and rent them out to middle-class families.

The government will help convert mid-income earners’ mortgages worth some 40 trillion won into long-term loans with fixed interest rates, while providing financing of more than 20 trillion won to tech startups and midsize companies.

The Finance Ministry noted that the government might need to readjust its state budget in line with its economic reform plan as there would be changes at state-run organizations.