[ The Korea Herald – Send E-mail ]
Legal battle looms over Moneual loan fraud
State insurer moves to reject insurance claims of banks that offered loans to Moneual
By Korea Herald
Published : Jan 6, 2015 - 21:01
Updated : Jan 6, 2015 - 21:01
A legal battle between the Korea Trade Insurance Corp. and a group of local banks looms large as the state-run firm is moving to reject their demands for insurance payments over a huge fraud scandal involving a start-up.

The trade corporation, also known as K-sure, will soon announce its final decision not to comply with insurance payments to the six local banks which paid some $304 million in soured loans to the firm Moneual, company officials said Tuesday.

But some officials in the banking industry contended that the government-invested insurer is trying to avert its responsibility in connection with the swindle case involving home appliance manufacturer Moneual. 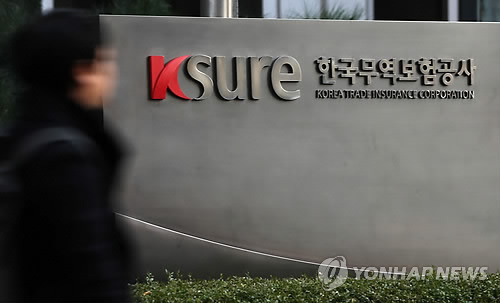 A pedestrian walks past the headquarters of K-sure in Seoul. (Yonhap)
The result is to be officially delivered to the Industrial Bank of Korea, Korea Development Bank, Korea Exchange Bank, Kookmin Bank, NongHyup Bank and Suhyup Bank within the week, according to officials.

“(The banks’ loans to Moneual) may not be seen as a regular loan transaction as key documents were either omitted or processed in a wrongful way,” K-sure said.

For instance, over 300 insurance claims were made on the issue but most of them were void of qualified export bonds, according to officials.

Should the banks continue to protest, the case may be taken to an independent dispute settlement board, and then finally to the court.

But the banks argued that K-sure was not entitled to cite such dispute settling processes at all.

“We were taken aback when K-sure said that the related loan documents were sloppy,” said a spokesperson of one of the six banks, who wished to remain anonymous.

“It is K-sure that takes charge of the actual credit assessment (for the loan requesting company) and the banks only examine the export documents (submitted by the company).”

Moneual submitted forged shipping bills and receipts to falsely prove its exaggerated export performances. The home appliance manufacturer went bankrupt in December after failing to pay back a due export bill.

Several senior incumbent and former bank officials are suspected of being involved in the loan fraud. Former K-sure president Cho Kye-ryoong was arrested last month on charges of taking kickbacks from the company.