Jun, 35, won the Grand Prix with “My Love from the Star,” one of the greatest hits for her and the television broadcaster alike. The SAF recognized the hallyu actress for her outstanding acting and the drama’s stunning ratings and popularity at home and overseas.

Prior to the award ceremony, some drama critics had suggested that Jun and Kim might share the top accolade.

The results were more or less undisputed largely due to the public sentiment that the Grand Prix must take into account not just the actors’ role but their acting career and experience. 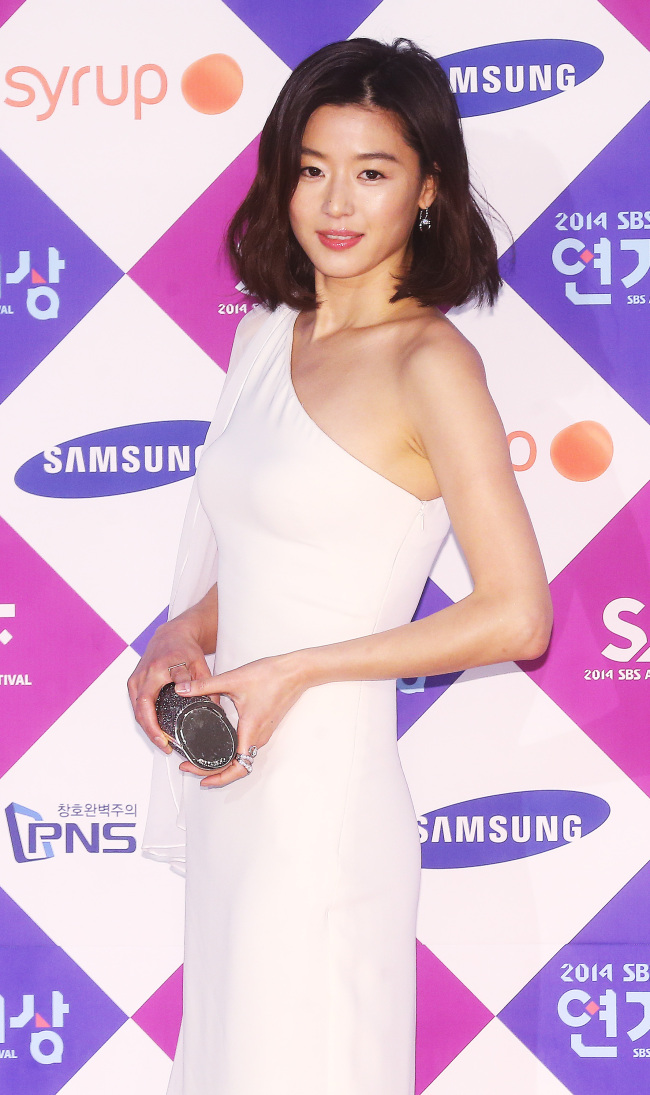 Actress Jun Ji-hyun poses at the 2014 SBS Awards Festival at Coex in Seoul on Wednesday. (Yonhap)
“Thank you, it is refreshing to stand here because the drama (‘My Love from the Star’) was being broadcast around this time a year ago,” Jun said during her acceptance speech. The actress also acknowledged the drama’s producer Jang Tae-yoo and scriptwriter Park Ji-eun, her fellow actors and production crew, her husband and, above all, Kim Soo-hyun.

She said, “My amazing costar, Kim Soo-hyun, thank you so much. I wouldn’t have won the award without you. Thank you.” She also shook up the Coex convention hall with her thank-you comment to her husband. She said in an ingratiating nasal voice, “Honey, don’t you ever fall asleep tonight.”

Jun’s award was announced after Kim, winner of the Best Actor Award in the mid-length drama category, was called to the stage.

Kim, 28, stood at the podium and thanked his family, his agency and the production crew.

Sobbing, the actor said, “Thank you so much, my beloved mother, elder aunt, younger aunt and father, I love you always.”

“My thanks also goes to producer Jang Tae-yoo and scriptwriter Park Ji-eun of ‘My Love from the Star.’ I also owe the whole staff who worked for the drama. My dearest Chun Song-yi, Ji-hyun nuna (older sister), Kim Chang-wan, Shin Sung-rok, Park Hae-jin, Yoo In-na, Ahn Jae-hyun and other colleagues, senior and junior actors, I owe you all.”

Kim also mentioned the enormous pressure he feels whenever he plays a new character.

“I get scared when I set out on a new project, because I still lack in experience. I was scared about playing Do Min-jun (in ‘My Love from the Star’) because he was such a fresh character. But I will march on with more projects in the future. I am still a half-baked actor, but I ask for your support in the days to come.”

The SAF gave various drama awards to other actors from “My Love from the Star.” In the mid-length drama section, the festival conferred the Special Acting Award to Kim Chang-wan, the Excellent Actor Award to Shin Sung-rok and the New Star Award to Ahn Jae-hyun.

In the full-length drama category, the Best Actor Award went to Lee Je-hoon of “Secret Door” and the Best Actress Award to Hwang Jung-eum of “Endless Love.”

In the short drama section, the Best Actress Award went to Park Shin-hye of “Pinocchio.”

In the mini series section, the Best Actor Award went to JYJ’s Park Yoo-chun of “Three Days” and the Best Actress Award to Gong Hyo-jin of “It’s Okay, That’s Love.”

The Legacy Award went to the late actress Kim Ja-ok, 63, who died of lung cancer in November.