[ The Korea Herald – Send E-mail ]
Nissan Leaf makes Korean debut on Jejudo
By Korea Herald
Published : Dec 28, 2014 - 21:48
Updated : Dec 28, 2014 - 21:48
The Nissan Leaf, the world’s best-selling electric vehicle, made its Korean debut on Tuesday, with the first batch of 15 vehicles delivered to customers living on the southern island of Jejudo.

Launched in late 2010, the full-electric five-door hatch has sold more than 147,000 units globally. It churns out up to 80 kilowatts of power (109 horsepower) and a maximum torque of 25.9 kilogram meters. 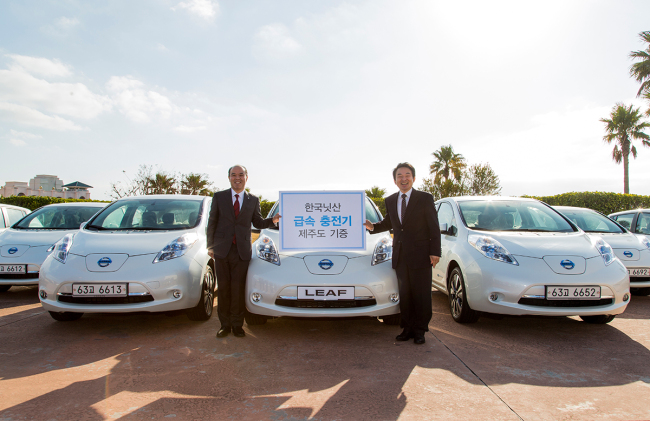 In Korea, the car is priced at 54.8 million won ($49,700). Jejudo residents can purchase the car for almost half price as they receive 23 million won in EV subsidies.

The 180-kilometer-long road around the island is also a good fit for the car, which can travel 132 kilometers on a single charge.

“Nissan will play a leading role in spreading electric mobility to the Korean market. This Jejudo launch is the first historic step,” Nissan Korea CEO Takehiko Kikuchi said during the launching ceremony on the island.