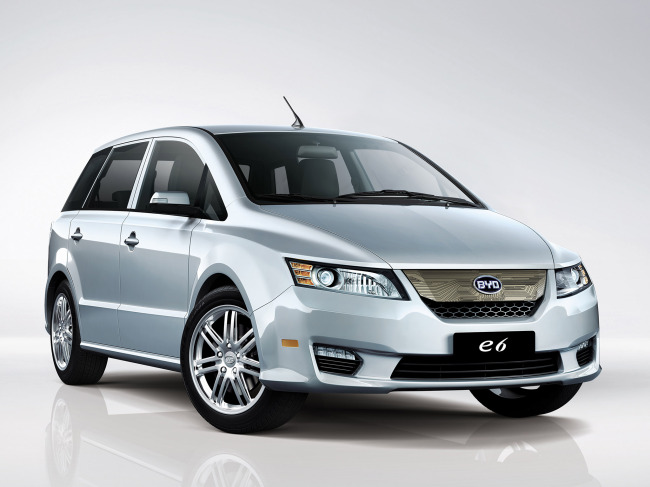 “BYD executives visited the island recently and they were greatly impressed by the abundant infrastructure here,” said Park Jae-chan, director general of the event. But no immediate plans for Korean sales are known, he added.

Founded by billionaire chairman Wang Chuanfu as a battery and handset-component maker, the Shenzhen-based company has recently expanded its business into EV manufacturing.

The e6 is a full-electric crossover with a staggering driving range of 300 kilometers on a single charge. The cars are also used for taxi fleets in China, Europe and Southeast Asia.

The car sold some 1,600 units in China last year. It is priced at about $56,900 before government subsidies.

BYD is the latest carmaker to arrive in the southern island of Jejudo that boasts abundant charging infrastructure and generous incentives for zero-emission electric vehicles. The local government offers 23 million won ($21,000) per EV purchase ― the world’s highest level.

Jejudo Island plans to offer EV incentives to 1,500 vehicles in 2015, half of the total 3,000 vehicles subject to government subsidies in Korea.

The expo, which kicked off this year, is the world’s first automotive exhibition solely dedicated to full-electric vehicles. BMW’s i3 and Nissan Leaf also made their Korean debuts during the event.

According to expo officials, the second event next year will be held from March 6-15 at Jejudo International Convention Center. Some 20 carmakers, including Kia Motors, Renault Samsung, BMW and Nissan, will showcase their electric models. Along with BYD, newcomers will include Detroit Electric and Mahindra.

Expo officials predicted that some 70,000 people would visit the expo site during the 10-day-long event.