[ The Korea Herald – Send E-mail ]
Expat star Kaya pulls plug on TV appearances amid rumors of adultery
By Korea Herald
Published : Dec 3, 2014 - 20:23
Updated : Dec 3, 2014 - 20:23
Popular expat TV actor Enes Kaya has announced that he is halting all his scheduled broadcast appearances amid reports that suggest the Turkey-born entertainer has been cheating on his wife.

A woman whose identity has not been revealed broke her silence on Tuesday and told a local media outlet that she had been romantically involved with the 30-year-old “Abnormal Summit” star, after Kaya told her that news of him having a wife and child were merely a showbiz ruse. 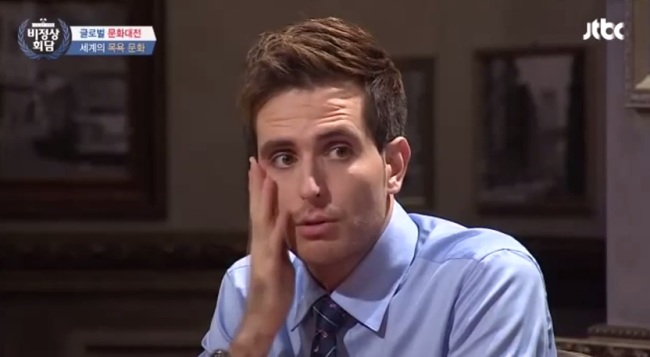 A screen shot of expat TV star Enes Kaya on an episode of JTBC’s “Abnormal Summit.” (JTBC)
Although in past broadcasts the actor had spoken publicly about getting married in 2011 to a Korean woman, the female source ― who claims to be the star’s former lover ― stated that he had lied to her, stating that his marriage was a fabrication that was forced upon him by members of the TV industry. He falsely assured her that he was actually a bachelor, she said.

“Although I asked him directly (if he was married), he kept avoiding the subject,” the woman told the media. “He kept insisting that TV writers forced him to say that he was married.”

The accusation comes as a shock to the public as the expat, whose superb fluency in Korean has made him a huge star in the country, is widely known to be an extreme conservative.

The woman who exposed Kaya’s alleged infidelity posted a string of comments online demanding that the star apologize to her as well as to his wife, for his deception and extramarital affairs.

The source also disclosed a number of KakaoTalk text messages, which she claims were sent between the actor and herself. It has yet to be proven that Kaya was in fact the other party in the conversation.

In the alleged messages, the TV star insists that his past claims of being married are false, and some of the conversations are explicit in nature. In one screen capture of a Kakao chat room, the entertainer asks the female source to “Come over and spank me,” while in other chats, the actor tells her that there are still so many things they need to do with one another, including “kisses” and “massages.”

When a news outlet asked the female source if she knew that Kaya had a child, she replied that she had once again confronted Kaya after finding pictures said to be of his wife and child, posted online by netizens.

“He said (the young girl in the picture) was the daughter of one of his friends,” she stated. “When I asked about a picture of his wife and a picture of his daughter that was being circulated all over the Internet, he said that back in 2011, he faked a marriage for visa purposes in order to play a role in the film ‘Haunters.’”

Rumors are circulating about Kaya’s future on the small screen, with a number of reports claiming that due to the scandal, the actor has decided to leave Korea and return to his home country of Turkey.