The 12-year-old daughter also left behind a note. “It’s going to be OK because our family is going to be together forever,” it said.

A week later, the reasons behind the family’s suicide emerged. According to the police, it was debt.

The couple owned 15 apartments in Incheon, with mortgages totaling 900 million won ($831,000). The father, a former property auctioneer whose business went bankrupt, had been making 2.1 million won a month working at a waste disposal firm since August last year.

Unable to pay off the mortgages with their limited income, they borrowed heavily from private lenders at high interest rates, which put them neck deep in debt, with no way out.

The family members are just three of some 14,000 South Koreans who kill themselves every year. Last year, 14,427 people ended their lives in Asia’s fourth-largest economy, equal to an average of 40 suicides every day.

South Korea’s suicide rate is already notorious, the highest among OECD nations from 2003 to 2013. The latest statistics show that an overwhelming majority of people who consider ending their lives do so due to financial hardship -- particularly debt.

According to data of the National Assembly Budget Office obtained by The Korea Herald, South Koreans in every age group ― except teenagers and children ― said they thought of killing themselves the most when they faced “financial difficulties,” through the years of 2006 to 2012. 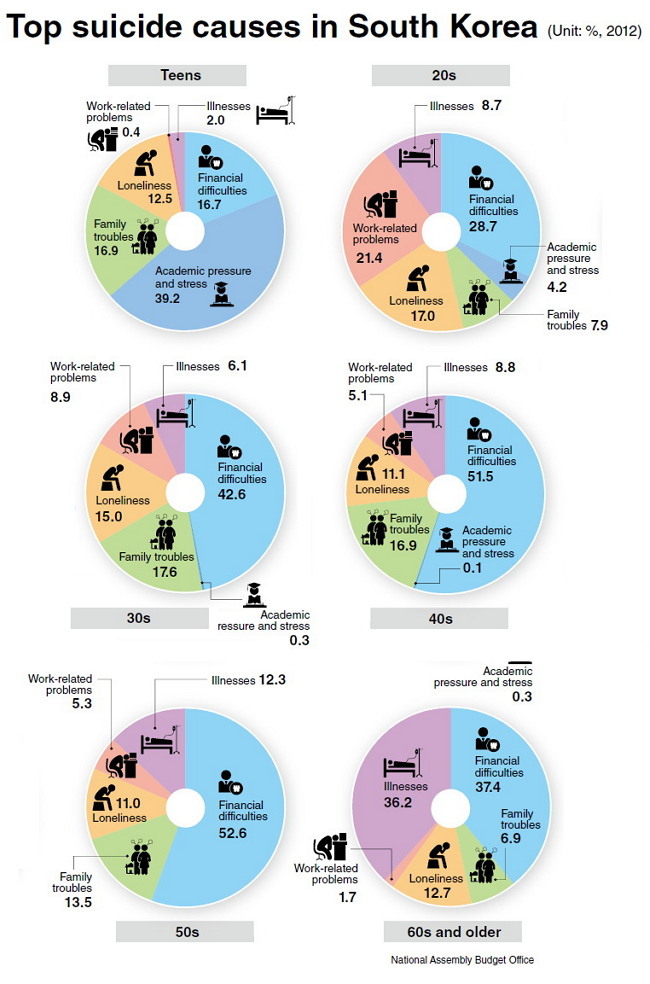 Meanwhile, the country’s household debt has increased at the fastest rate in eight years. As of this year, Korean households owe more than 1,000 trillion won ($932 billion), which is almost 1.6 times the country’s gross annual disposable income. The per capita debt works out to 20 million won, an astonishingly high figure.

Also as of this year, some 70,000 university students are reported to have borrowed funds from private lenders at a monthly interest rate of 30 percent or higher to pay for tuition.

On top of that, a Korean think-tank recently said that it would take 29 years on average for a newly married double-income couple to save enough to lease an apartment in Seoul ― costing about 280 million won as a lump-sum deposit under Korea’s “jeonse” real-estate system ― if they choose to avoid borrowing.

As noted by Lee Chae-jeong, a policy analyst at the National Assembly’s Budget Office, the suicide rate among Koreans in their 30s to 50s has been rising since 2011, which is a matter of very “serious concern.”

“This means those in the workforce are, for whatever reason, feeling completely hopeless and are giving up on themselves and even their children,” she said.

Adding to this problem is the low government prioritization. The Health Ministry set aside only 0.26 percent of the National Health Promotion Fund for suicide prevention programs last year.

Most of the currently available services are counseling and psychotherapy, which do not offer professional or legal advice on personal finance, credit ratings or debt management. The counsellors sometimes even redirect patients they see as a suicide risk to financial consulting firms or banks, Lee said.


Identity of the debt-ridden

Kim Hee-cheol, 57, used to be a private banker, providing personal financial services to mostly wealthy clients. He is now the president of The Hopemakers, a social enterprise and consulting firm that offers financial advice and affordable loans to those who struggle with debt.

Since establishing the firm in 2008, he’s met hundreds of people who wanted to end their lives because of debt. One of his clients called him while deciding whether to jump to his death.

“The suicide statistics don’t surprise me at all,” Kim said in an interview in his office in Seoul.

Most debt crises are manageable with professional help and lifestyle adjustments, as long as one has a regular income and hasn’t borrowed from illegal loan sharks, he said.

The real problem is that many employed people are unaware of this.

While working at commercial banks, he realized that a surprisingly large number of people get into trouble simply because they don’t know about debt management options, such as workouts ― which allow individuals facing liquidity problems to reduce and renegotiate their delinquent debts.

“A lot of Koreans have this perception that if you are debt-ridden, it is your fault. You must be either incompetent with extremely bad spending habits or a gambler,” Kim said.

On the contrary, most of Kim’s clients are ordinary citizens, many from the middle class. Their financial distress usually starts when they are suddenly unable to make mortgage payments after suffering an illness or business loss. More often than not, they dig themselves into an even deeper hole by approaching private lenders.

“I have to say, it’s not entirely their fault, and the system is partly to blame,” he said.

“Most people consider it extremely humiliating to share and admit that they have a debt problem. And you’d be surprised at how many (Koreans) think the only way to pay off a debt is to earn more money, or get more loans.”


To be young and impoverished

Kim Eun-young (not her real name), a 23-year-old mother living in Incheon, thought exactly this, before hearing about The Hopemakers.

Depressed and harassed by debt collectors, she had been suicidal. Unable to pay her bills and monthly rent, she and her family had been without gas for almost a year and were about to get thrown out of the house with literally nowhere to go.

Her extended family could be of no help as they were all recipients of the state subsidy ― given to destitute individuals who make less than the government-designated minimum cost of living of 603,403 won a month.

“I thought it might be actually better for my baby to be raised by an institution,” she said in a phone interview. “I really wanted to just end everything.”

Kim’s financial nightmare was triggered by a rather careless mistake ― she was unaware of the drawback term for her student loan.

The young mother and university dropout was only informed about her drawback period when the late-payment charges had exceeded 1 million won ― more than the monthly salary of her husband, who was then a phone salesperson on a contract. She was a part-time cooking instructor and was paid every six months.

Following a medical emergency Kim felt she had no choice but to borrow 3 million won from a private lender. However, it was automatically withdrawn from her account by the student loan provider without her knowledge. She was back to square one and ended up borrowing more money.

“Yes, it was clearly my fault, but the price of the mistake was too harsh. I wish they had informed me about the drawback period before my late fees became unmanageable.”

The situation soon became unbearable. Most of their monthly income was spent paying off late fees and loans. Soon, they couldn’t pay for their gas and rent, and even food. Kim ended up bringing leftovers from her cooking class to feed her baby.

“I would not know what to say and just cry,” Kim said.

She received no better treatment from a social worker at a civil service office in Incheon.

Kim begged him, in tears, to allow her to pay her gas bill in installments for the sake of her trembling baby. But what he said in return cut her deeply.

“He told me, ‘This is your fault. Why do you want the state to take care of your own mess?’” Kim said. “What he said just made me feel utterly hopeless. I felt so alone.”

The fact that impoverished South Korean families often commit collective suicide is a proof that the country does not have an adequate social safety net, said Yeo Yoo-jin, a researcher who specializes in poverty issues at the Korea Institute for Health and Social Affairs.

“It means the parents somehow think it is better for their children to end their lives than to live as poor orphans here,” she said.

The limited social safety net is not enough for the underprivileged, who have to depend on each other in times of crisis.

Under the current law, the recipients of state subsidy lose a portion or all of their allowance if any member of their immediate family has a regular monthly income, depending on how much they make.

“For a destitute elderly individual (or a disabled person with limited income) to receive the full state subsidy, he or she either has to have very poor children with no income, or heartless children who cut off all contact,” Yeo said.

Further, a debt crisis, in particular, often leads to family disintegration and isolation of impoverished individuals.

“The most difficult cases are those who have lost their jobs or who don’t have any income, and those who have borrowed funds from illegal lenders. For those clients, sometimes we have no solutions to offer,” said Kim of The Hopemakers.

“I have seen many of them getting divorced and separating from their families.”

The Hopemakers have dealt with some 6,000 clients since its establishment, and some 30 percent of them became debt-ridden while supporting their families.

Park Soo-hee (not her real name), a 57-year-old nurse, is one of them. In 2006, her husband’s business went bankrupt, and two years later he was diagnosed with cancer and died five years thereafter.

The medical cost and bankruptcy left Park with 60 million won in debt. She successfully filed for a debt-workout program, and had been paying it off for the past eight years until her son got married. She gave him all of her savings ― 20 million won ― to help him purchase an apartment with his wife.

However, shortly after, a personal emergency left her 10 million won out of pocket and she became unable to pay her monthly workout payments. She did not discuss the matter with her son as she did not want to “burden him,” and soon descended into a period of depression, with thoughts of killing herself.

“My husband was gone, my son had moved out. I was alone,” she said.

“When I thought all of my duties were done, the only thing that was waiting for me was debt.”

Park considers herself lucky for discovering The Hopemakers, claiming she would have otherwise gone to private lenders. The consulting firm helped her find a bank loan program, which she didn't even know she was eligible to partake.

“It is so easy to spot advertisements about money lenders and even loan sharks in public,” she said. “Isn’t it ironic how it is so difficult to find information about debt management?”

The Kim Eun-young, on the other hand, was informed by The Hopemakers that there were debt-workout programs that she didn’t know she was qualified for, and learned about how to manage her personal finance and spending habits. Also on the firm’s advice, her husband got another job, which gave him more income stability.

Kim remembers a specific moment that literally changed her life.

“My consultant at The Hopemakers told me, during our first meeting, that my situation wasn’t entirely my fault,” she said.

“No one had ever told me that before. Ever.”