[ The Korea Herald – Send E-mail ]
Sewol captain gets 36 years, cleared of murder charge
By Kim Yon-se
Published : Nov 11, 2014 - 20:07
Updated : Nov 11, 2014 - 20:30
A district court Tuesday sentenced Lee Joon-seok, the captain of the sunken Sewol ferry, to 36 years in prison for abandoning the vessel without taking any measures to evacuate or save passengers during its lethal sinking.

The Gwangju District Court, however, acquitted Lee of homicide by willful negligence and of murder charges. The captain was among the first to leave the ill-fated ferry as it sank in waters near the southwestern port of Jindo Island on April 16. A total of 295 people, mostly teenage students on a field trip, have been confirmed dead with nine still missing.

The court’s verdict said that the prosecution failed to sufficiently prove Lee’s criminal intent in relation to the homicide charge. The prosecution had earlier sought the death penalty for the 69-year-old skipper.

In the same ruling, the court convicted chief engineer Park Ki-ho of murder, as he was blamed for deserting two wounded staff when the ferry was sinking. Chief mate Kang Won-shik and second mate Kim Young-ho were cleared of the homicide charges.

Park was given a jail sentence of 30 years, while Kang and Kim were given 20 years and 15 years, respectively.

The verdict prompted the families of the ferry victims to express anger toward the judges at the Gwangju court. The families had demanded the death penalty for the captain and other key crew members, holding them accountable for the sinking and negligent acts. 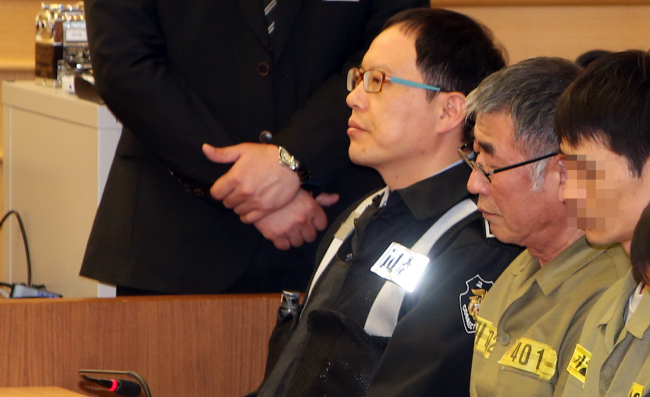 Sewol ferry captain Lee Joon-seok (center) attends trial along with the 14 of the sunken ferry’s crew at the Gwangju District Court on Tuesday. The court rejected the murder charge brought against Lee and sentenced him to a 36-year prison term in place of the death penalty demanded by the prosecution. (Yonhap)
Prosecutors had also denounced Lee and the other 14 crew members for their behavior that resulted in the deaths of innocent victims on board.

During the court trials over the past few months, the prosecution cited the testimonies of some survivors, who said the sailors had told the passengers to stay inside the cabins while they were preparing for the evacuation.

The captain and crew members were the first to be saved by the Korea Coast Guard 40 minutes after the accident.

Meanwhile, some crew members of the Sewol ferry reportedly admitted in a court hearing that they abandoned passengers and escaped the vessel.

Most of the crewmen had worked for Chonghaejin Marine Co., the operator of Sewol ferry, which was de facto owned by the late Yoo Byung-eun.

In addition, some crewmen were found to be devotees of the malfeasance-saddled Salvation Sect, which was led by Yoo, who was found dead in June while on the run after the April 16 catastrophe.

Yoo, who died at age 73, has been suspected of overlooking the risks of overloading the Sewol vessel with freight early this year, even though the ferry had a weakened ability to maintain left-and-right balance when turning, due to a renovation that added more cabins to the vessel.