“The company’s accumulated domestic sales hit a record high of 123,928 units between January and October,” GM Korea president and CEO Sergio Rocha said at a press luncheon on the sidelines of Chevrolet Turbo Track Day.

The carmaker hosted the first showcase of its three turbocharged Chevrolet brand models ― Aveo, Trax and Cruze ― for local media at the Yongin Speedway in Gyeonggi Province with its Chevrolet racing team. 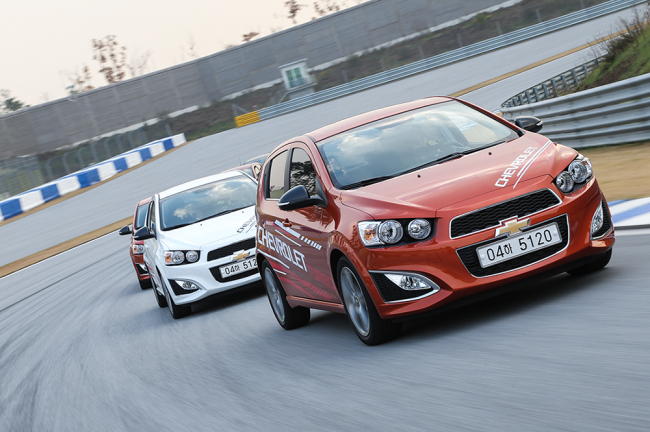 Vehicles run on a race track during Chevrolet Turbo Track Day at the Yongin Speedway in Gyeonggi Province on Friday. (GM Korea)
The chief of Korea’s No. 3 carmaker expressed confidence in this year’s domestic sales performance, joking that he would dye his hair if domestic sales hit 160,000 units by year-end ― which would bring the carmaker to its 10 percent domestic market share goal.

Company data showed sales of Chevrolet vehicles powered by 1.4-liter turbocharged gas engines had a major hand in sales growth this year. Reflecting such popularity, the company lined up a “turbo trio” lineup by launching the turbo engine-powered Aveo, an upgrade for the 2015 model year, following the Trax and Cruze.

The turbocharged engine has four cylinders and 16 valves. It produces 140 horsepower and 20.4 kilogram meters of torque, the company said.

“It is a sign of our commitment to expand the availability of high-efficiency downsized products that are exciting to drive,” Rocha said.

The CEO projected that 2015 would be a very good year for GM Korea.

GM Korea, including its Cadillac brand, plans to launch 10 new cars next year.

Regarding the launch of GM’s long-tailed classic Chevrolet Impala in Korea next year, GM Korea declined to give the specific timeline, saying it is still determining whether the car will be a good fit for the Korean market.

The company CEO also highlighted major tasks that lay ahead.

“We have challenges as well. Labor costs are going up, which is a major issue not only for the car industry, but also for the country,” he said. 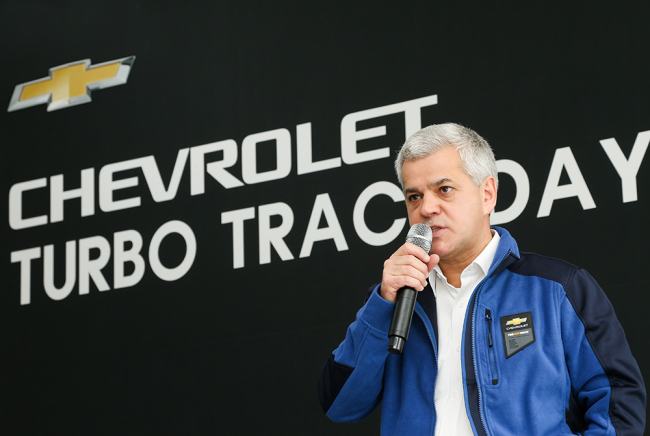 The government recently announced it would lower the carbon dioxide emissions target to 97 grams per kilometer for the 2016-2020 period in an effort to meet global standards for greenhouse gas reduction targets.

GM Korea is in talks with the government over a flexible application of the regulation.

Recovering the sluggish exports is another major challenge, the company chief admitted.

With the group’s decision for Chevrolet to exit Europe at the end of last year, GM Korea’s exports fell by 25 percent, or 150,000 units.

The carmaker expected that outbound shipments of 50,000 units could be met with orders from the U.S. and Uzbekistan this year.