The incident was only the beginning of a series of greater tragedies. Branded as a communist, his father, who was a fire captain in his hometown of Yeoju, Gyeonggi Province, was shot dead by South Korean authorities after the three-year conflict. The entire family was destroyed, and Lim himself nearly died from tuberculosis.

His brushes with death, however, did not kill his dreams. In 1966, a penniless Lim took a flight to the U.S. and pursued religious studies while working as a janitor, painter and gardener. He then ventured into business, boasting acumen in retail, health food and real estate, among other areas.

In 1992, Lim set a milestone in Korean-American history, becoming a state senator in Oregon. After serving five straight terms, he is now seeking to “set up memorials dedicated to U.S. Gen. Douglas MacArthur and former South Korean presidents who contributed to the country’s economic and political development, such as Park Chung-hee and Kim Dae-jung. 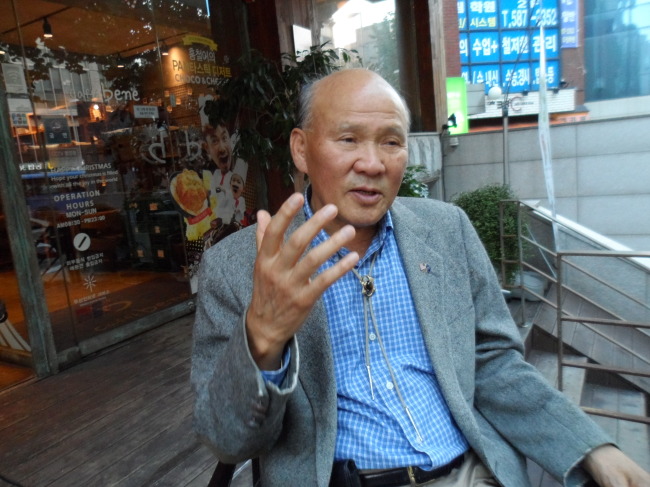 Former Oregon Sen. John Lim speaks during an interview with The Korea Herald. (Shin Hyon-hee/The Korea Herald)
“Despite lingering controversies, MacArthur did fight for our liberty during the war, while Park and Kim are symbolic figures respectively for economic growth and democracy and peace, even though there may be ideological differences between the two,” Lim told The Korea Herald.

“The final decision on whose statues are to be erected will be made by the board of our foundation. But whoever they are, it will be the first monument of its kind in the U.S. that has a historical meaning,”

The five-year project was initiated after some liberal civic groups called for the demolition of a MacArthur sculpture at a public park in Incheon last year.

The Lim-led Korean War Memorial Foundation of Oregon initially sought to take over the statue, but then decided to have a new one made. In 2000, it established a 5-acre memorial park within a city park of Wilsonville near Portland to commemorate the war and U.S. veterans, with the support of the Seoul government, the city and South Korean businesses there.

Each life-size monument is expected to cost $100,000, for which Lim is carrying out a fund-raising drive. His monthlong visit to his homeland is aimed at drumming up support from the central and local governments and related organizations.

While the Wilsonville government donated the land, South Korea’s Minister of Patriots’ and Veterans’ Affairs has also promised financial assistance and plans to visit the park next year, Lim said.

“I hope the project will help raise awareness about the Korean War and that such a tragedy should never occur again,” he said.

“From the memorial park to the monuments, we set out from nothing. But I believe a small idea can have a big impact in the town, city and eventually the whole country.”

Since his first election, the Korean-American community has increased its maturity and influence in society remarkably, such as in the recent launch of memorials across the U.S. dedicated to the victims of Japan’s sex slavery during World War II, and the passing of a bill in Virginia calling for the parallel naming of East Sea and the Sea of Japan in school textbooks.

“Second-generation immigrants are different from us ― they have no handicaps that the first generations have, such as language barriers and a lack of cultural understanding,” Lim said.

“If our pioneer spirits and know-how and their advantages are combined, it could provide a springboard to greater roles of the Korean-American community in U.S. society. Though turnouts remain low among Korean voters, there is a huge potential for future progress.”