[ The Korea Herald – Send E-mail ]
[Herald Interview] Saudi Arabia to benchmark Korea’s transport systems
Top city officials enticed by efficiency, low costs
By Korea Herald
Published : Oct 19, 2014 - 20:54
Updated : Oct 20, 2014 - 03:24
A top official of Saudi Arabia’s capital city of Riyadh said that he would like his country to adopt Korea’s smart transportation system, which was unlike anything he has seen before.

Nine officials, including Alsheikh, from Arriyadh Development Authority visited Seoul to benchmark Korea’s transport system this month on an invitation from the Korea Trade-Investment Promotion Agency and The Korea Transport Institute. The authority is in charge of the overall development and operation of the city. 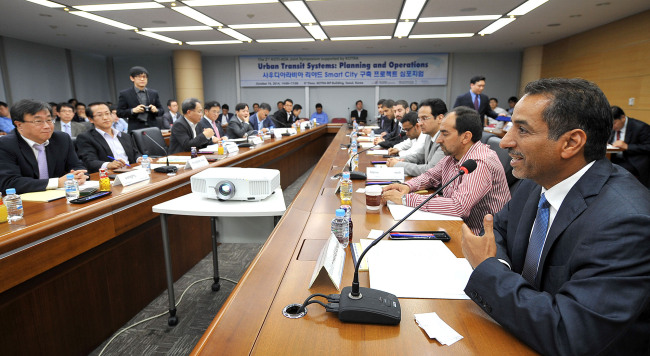 However, Korea’s intelligent transportation system, was “something that I have not seen anywhere else,” said Alsheikh.

Riyadh ― with a population of 5.7 million, expected to grow to 8.3 million by 2030 ― is currently engineering massive projects for revamping its transportation system.

So far, Saudi Arabia had few transport alternatives besides cars, it is now moving proactively to address its steadily growing traffic, he said.

This year, the Saudi capital commenced the construction of a six-line mass-transit metro system, which officials expect would form a transport backbone for the city. The project is estimated to cost up to $23 billion.

The city’s development agency also plans to place orders for the city’s traffic management system and bus transit network for a combined cost of about $20 billion.

“We plan to build a sophisticated public transportation network, like the one we have witnessed in Seoul,” Alsheikh said.

He said the Bus Rapid Transit network, which will use dedicated highway lanes, will revolutionize the way in which the people of Riyadh, and also visitors ― who amount to hundreds of thousands every year ― travel.

“Especially, LG CNS’ smart card was impressive. You can do pretty much everything with one card ― from shopping to paying for the public transportation,” he said.

“What amazed me and what I would like to adopt was the mobile card which you can use as a credit card. You don’t have to carry too many things.”

Saudi Arabia is a country that boasts one of the highest smartphone penetration rates in the world. According to 2013 data, some 72.8 percent of Saudi Arabian people own smartphones whereas 73 percent of Koreans have the smart gadget.

“Here, through the mobile, you can get information about when buses and metro trains arrive and leave and check traffic conditions. I would like to see the same kind of system in my city as well,” he said.