First launched in 2013 as an exclusive service for employees of Korean Internet giant Naver, Blind message boards are made upon the request of employees of the same company or of the same industry sector.

Since the message board is accessible only to those from the same firm or same industry, the subjects discussed on the board are mostly linked to their work, ranging from salary and employee benefits to job-hunting.

“Blind serves as an outlet for Korean employees to express and share their ideas, helping them not only to communicate with each other but also to make their workplaces better,” Jung Young-joon, co-CEO of the startup, said in an interview with The Korea Herald.

He added that positive changes, both trivial and important, were taking place in offices thanks to the Blind services.

In one case, an employee complained about the subpar menu at the company’s cafeteria on a Blind board. Pretty soon, the workers were digging into much better quality food. 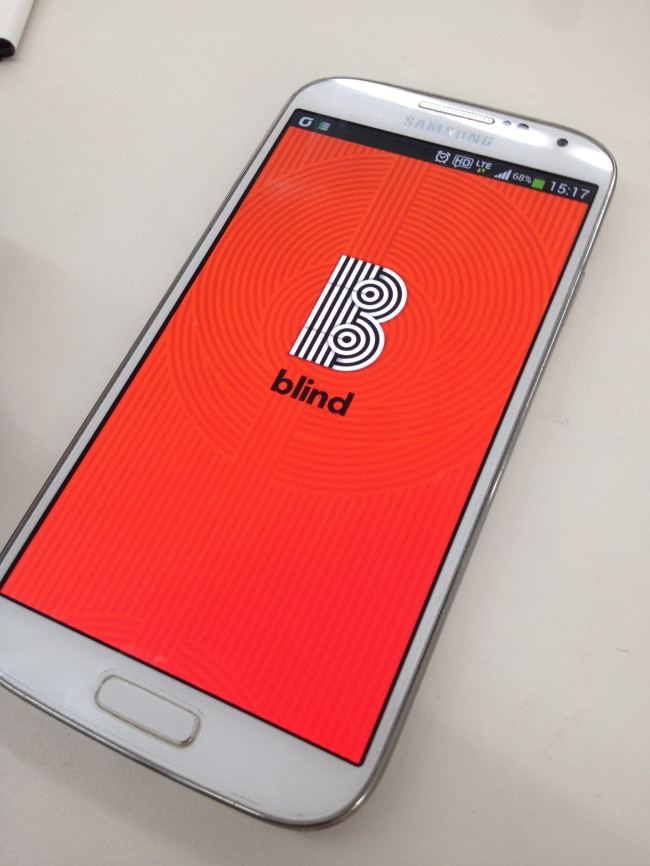 A mobile phone running a Blind message board application. (Team Blind)
Jung and co-CEO Moon Sung-uk said these changes are possible because some of the posts ― if considered important enough for various reasons ― are directly reported to company executives.

Even the executives themselves are contributing to the board to communicate to employees about their work, the company vision and, sometimes, even personal things that are hard to say face-to-face.

Blind first gained momentum as word spread in the local IT and gaming sector, with companies such as Nexon and LG Electronics joining in.

Around 40 companies in Korea are now operating anonymous message boards on Blind, including Daum Kakao, the operator of mobile messenger Kakao Talk, along with the country’s three major broadcasting firms ― KBS, SBS and MBC.

In order to have their own Blind board, employees must apply for one via a mobile application. Based on the number of requests, Blind decides whether or not to set them up with a board.

Anonymous online message boards often have well-known problems such as cyberbullying, slander and harassment, but these are rare on Blind, according to Moon.

“Users are adamantly against such abuse, and they self-screen by taking issue with those who have allegedly done harm to the board, such as by issuing slanderous or sexual remarks. I think it is because the users, who are working in the same industry, share a sense of community,” Moon said.

The co-CEOs said they would launch Blind services in different languages including Japanese and English.