[ The Korea Herald – Send E-mail ]
[Herald Interview] ‘Pilgrimage in memory of engineer father’
By Lee Woo-young
Published : Oct 9, 2014 - 19:10
Updated : Oct 9, 2014 - 19:10
The Chosun Hotel, which celebrates its 100th anniversary this year, holds a significant place in the modern history of Korea. It was one of the first modern buildings in Seoul, and served as a temporary residence for presidents, diplomats, businessmen and scholars, who created links between Korea and the outside world after the country opened up in the early 1900s.

For Sandra Huet, the hotel has a personal meaning.

It’s the place that keeps her memories of her father alive. Huet’s father George F. Stoneman was an industrial engineer who frequently traveled to Seoul from the 1960s to the ’80s on business trips that were as long as six weeks.

During his trips, the Chosun Hotel, then The Westin Chosun, was his temporary home.

“He always sent us postcards on every trip. When I thought about coming to Korea, the first thought was this hotel. It’s like a pilgrimage for me to come to where my father had visited,” said Huet in the interview. 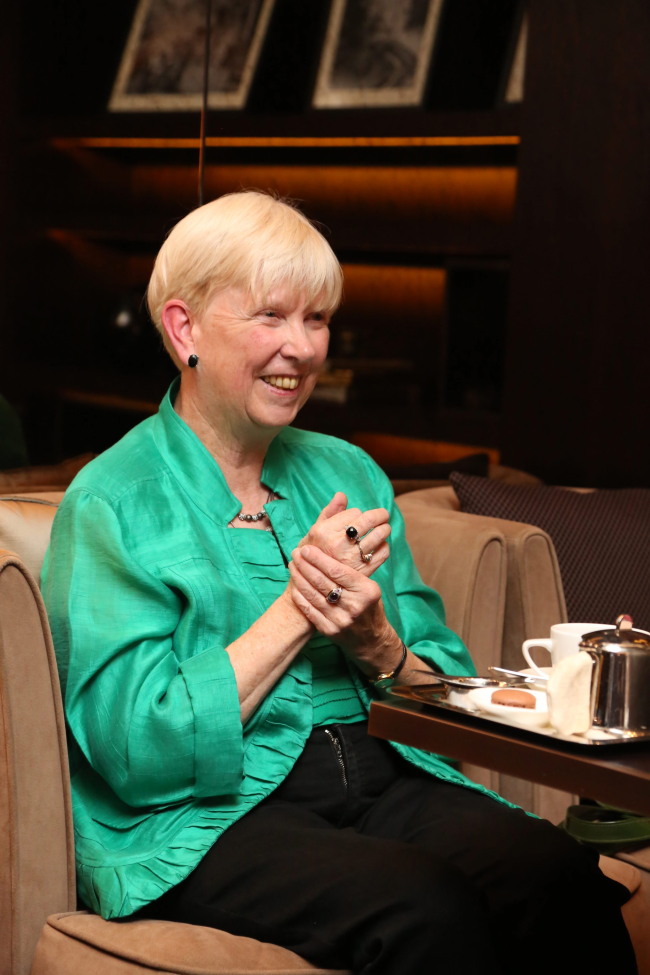 Sandra Huet, the daughter of an engineer who frequently traveled to Seoul and stayed at The Westin Chosun Seoul, speaks during an interview with The Korea Herald.
Huet, born in California, worked at IBM France for 33 years with her French husband. After retiring 10 years ago, Huet traveled to Seoul in search of memories of her father, who passed away in 2002.

On her second trip to Korea in late September, She retraced her father’s footsteps in Seoul through postcards he had sent her and receipts he had kept from the hotel’s restaurants.

One of the postcards, dated October 1971, reads, “First four weeks since I left home and two more weeks to go. This was the first time I didn’t have a schedule and walked across to Deoksugung Palace.” Deoksugung Palace, a five-minute walk from the hotel, is one of the four major royal palaces in Seoul.

Huet discovered that her father ate at Ninth Gate Grille, the first French restaurant in Korea, which now serves Western-style food. She dined there too, overlooking the night view of the Temple of Heaven, from the 19th century, located on the hotel grounds.

“I think staying at the hotel was nice for him because he could walk over to historical places and relax a bit,” Huet said.

“He enjoyed the comfort the hotel offered. As a businessman, he used to take six-week trips to Korea, Japan and Australia. It’s a long trip. He needed a place where he could come back at night and get ready for the next day.”

Korean culture and history was nothing strange for Huet, who grew up receiving New Year’s greeting cards from her father’s Korean friends with pictures of women and men wearing hanbok, the traditional costume. But it was about seven years ago that she became interested in and decided to learn more about the culture.

“I saw ‘Daejanggeum,’ which aired in San Francisco. I watched the drama, which was completely unknown to me in terms of dress and hairstyle, but I watched a bit and the whole episodes with English subtitles. The drama started to get me interested in Korean culture and history,” said Huet. “Daejanggeum,” a period drama about the first female physician in the male-dominated Joseon era, first aired in Korea from 2003-2004.

She began to learn Korean history through books and period dramas such as “Jumong,” “Jang Bo Go” and “Yi San.”

Her visit in September coincided with the fall exhibition of the Gansong Art Museum, a treasure trove of artefacts and artworks, at the Dongdaemun Design Plaza in Seoul. The exhibition revealed rare portrait paintings of women including the “Portrait of a Beauty” by Joseon artist Kim Hong-do, featured on a postcard sent to her family by one of her father’s Korean friends.

“I still have eight Korean vases and the red lacquerware inlaid with mother-of-pearl which my father bought for me in Korea. I came here to see what my father had seen, but I also wanted to see the country myself, not just read about it from books,” Huet said.