The move aims to strengthen the eco-friendly lineup of South Korea's two largest carmakers and offer more choices to consumers.

The two cars will represent the first plug-in cars for the companies that are flagships of Hyundai Motor Group, the world's fifth largest automotive conglomerate. Hyundai and Kia both offer hybrid and electric vehicles (EV), with the latest being the Soul EV. 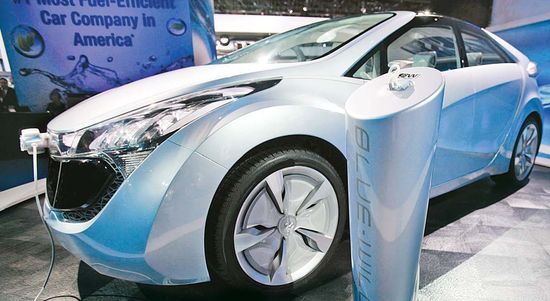 "Engineers have been successful in making almost all of the components that go into plug-in hybrids in the country," Yang Woong-chul, vice chairman of the automotive group's R&D division said. He declined to comment on the price but stressed they will be competitive vis-a-vis rivals.

South Korea is a worldclass leader in the production of high-tech rechargeable batteries, giving the carmakers an edge.

Hyundai and Kia said in the past that it will build up their know-how in powerful electric motors so as to reduce dependence on imports.

Others in the company said the Sonata plug-in will make its debut first followed by the K5, which is sold in some foreign markets as the Optima. The company, which recently spent 10.55 trillion won to buy a prime piece of real estate in Seoul, meanwhile said that the land purchase did not in any way affect research and development plans.  (Yonhap)