One of the key global symposiums on environmental cooperation, the international DMZ forum is scheduled to convene Wednesday at the Alpensia Convention Center in Pyeongchang, according the Korean secretariat of the 12th meeting of the Convention on Biological Diversity.

“Four parties will propose a sustainable development model by adopting a declaration of cooperation on the conservation of border areas including the DMZ,” said local secretariat director general Kim Sang-hoon.

He said the parties are the organizing committee, the Ministry of Environment of South Korea, international organizations and regional countries.

National Institute of Ecology president Choe Jae-chun will deliver a speech on the values and implications of Korea’s DMZ conservation. 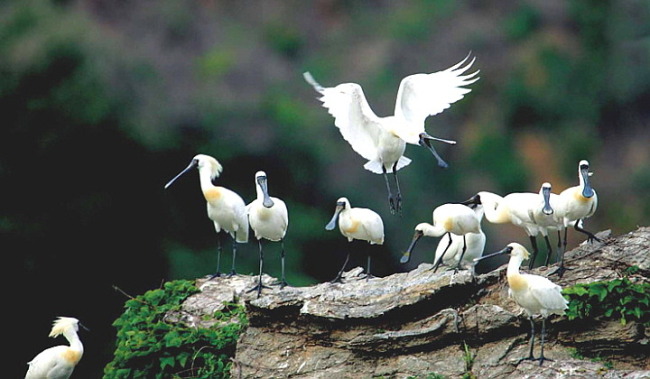 This photo taken by Koo Sang-beom of a flock of black-faced spoonbills at the Demilitarized Zone ranked No. 1 in an arts contest hosted by the Ministry of Environment to commemorate the 60th anniversary of the armistice agreement of the Korean War last year. (Ministry of Environment)
In his press release, Choe stressed “the DMZ is no longer a land of the Koreans only. It belongs to humanity and shares the right to enjoy the benefits that are gained through protecting biodiversity.”

He said that “if the unification process is hastened without proper preparation for the protection of its wildlife, the DMZ will lose its merit as a rare repository of biodiversity.”

Choe aims to make the DMZ project an agenda of the Presidential Committee on the Preparation for Reunification: “The 12th CBD meeting could provide us with an excellent opportunity to promote the concept and plans for the establishment of the DMZ Eco-Peace Park.”

Green Belt Germany director Kal Frobel is scheduled to compare the DMZ and German Green Belt during his speech.

“Both GGB and DMZ, which are linear structures created for political or military reasons, have been for long untroubled by human land use,” Frobel wrote in his research report. “As a result, these borders ― despite their horribleness to people ― became irreplaceable retreats for biodiversity.”

He added the DMZ also mirrors a typical and broad variety of Korean landscapes, from the coastal ecosystems and mountains in the east to the wetlands and estuaries of the Hangang and Imjingang rivers in the west.

UNESCO Regional Science Bureau for Asia and the Pacific deputy director Shahbaz Khan said the needs for transboundary conservation have also been raised due to the development of conservation concepts and practices.

Hahn Kwang-bok, president of the Korea DMZ Institute, is to deliver a presentation on the past, present and future of the zone. “The DMZ reveals how human beings, ruined by war, with persisting interference from the Cold War, coexist with nature,” Hahn wrote in his report.

Catholic University of Korea professor Cho Do-soon plans to propose that both the North and South Korean sides of the DMZ, each with an area of 500 square kilometers, be designated as a nature preserve by the natural monument system of both the North and the South. “Also we have to try to establish one or several national parks comprised of the DMZ and nearby civilian control zones,” Cho said in his press release.

Hallym University professor Kim Chae-han believes that “This biodiversity preservation is not the intended purpose of the DMZ but rather a positive manifestation of the military confrontation.”

In his media release, Kim said that many environmental activists are afraid that the DMZ ecosystem will be destroyed by the frequent exchanges that may result from inter-Korean reconciliation or even reunification.

Meanwhile, in her keynote speech at the 69th U.N. General Assembly on Sept. 24, 2014, President Park Geun-hye declared her plan to build a world eco-peace park in the DMZ. She said that this park would become the starting point to reconnect nature and a people who have been divided for over 60 years. She then made a plea for support from the U.N. and the international community.

About 20,000 participants are expected to attend the 12th meeting of the Convention on Biological Diversity, slated for Sept. 29-Oct. 17.

The Korean secretariat predicts that the number of participants will surpass that of previous conventions: around 16,000 in Hyderabad, India, in 2012 and 13,000 in Nagoya, Japan, in 2010.

The Convention on Biological Diversity was signed by more than 150 nations at the Rio “Earth Summit” in 1992 to propel sustainable development.

The coming Pyeongchang Road Map will include enhanced mechanisms for technical and scientific cooperation, capacity-building, financial resources, and the integration of biodiversity into development plans and other national processes.

To facilitate the implementation of the road map through strengthened technical and scientific cooperation, South Korea plans to propose a BioBridge Initiative, effectively linking technological and scientific capacities as well as financial resources in advanced countries to the need for science and technology in developing countries.