The 76-year-old has been accused of unwanted physical contact by a female caddie at a golf resort in Gangwon Province, according to Wonju Police Station in the region. The victim said she was “humiliated by the contact.”

The victim’s supervisors replaced her at her request shortly after the incident, and she reported the case to the police the following day.

Park admitted that there had been some physical contact, but maintained that he did not “cross a line.” He told a local daily that he poked the woman’s breasts with a finger once, adding that it was an act of adoration because she “felt like his granddaughter.” 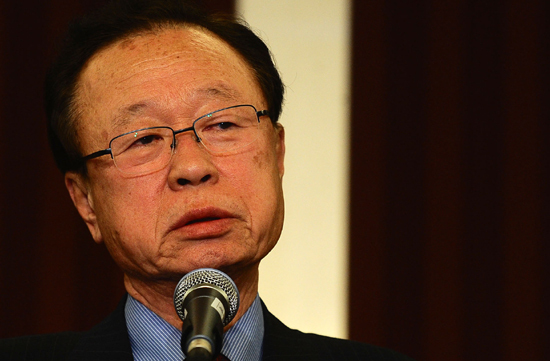 Park Hee-tae
“The person in question did not show her displeasure. Would I have done it (physical contact) if she had shown discomfort?” he said.

Police are to summon Park for questioning later this week.

The opposition New Politics Alliance for Democracy condemned Park and the ruling Saenuri Party, for whom Park is a standing adviser. It urged the ruling party to enhance its regulations to ensure that such incidents do not reoccur.

“Rather than make excuses that make no sense, Park must take responsibility and apologize to the victim and the people for his actions,” the NPAD said in a statement.

Park, formerly a six-time lawmaker for the Saenuri Party, was named the speaker for the National Assembly in 2010. He stepped down in 2012 amid allegations he bribed fellow lawmakers before winning the ruling party’s top post in 2008.

He later pleaded guilty to the money-for-votes charges.