The large square in front of the exhibition hall displays two large cast-iron stoves by Sterling Ruby, which emit a wood-burning smell and gray smoke. Rock music is heard from a distance ― the 1983 hit-single “Burning Down the House” by U.S. rock band Talking Heads, from which this year’s biennale borrows its title.

A huge octopus breaks out of the wall of the biennale exhibition hall in a banner painting by Jeremy Deller. The octopus, usually used for political satire, seems to suggest that the exhibition would not conform to the recent political censorship that mired the special exhibition held prior to the biennale in celebration of its 20th anniversary.

A satirical mural of President Park Geun-hye by a Korean artist was suspended from the exhibition held just before the biennale, leading the head curator and chief of the Gwangju Biennale Foundation to resign in opposition and causing controversy in the Korean art circle.

The biennale features works with strong messages and images that are on par with the intensity of the satirical mural by the Korean artist.

Jessica Morgan, director of the 10th Gwangju Biennale and curator at Tate Modern, selected works by 103 artists from 38 countries related to the biennale’s theme. Known for curating exhibitions with top contemporary artists, Morgan included some globally renowned artists such as Deller, Urs Fischer and Rosemarie Trockel. 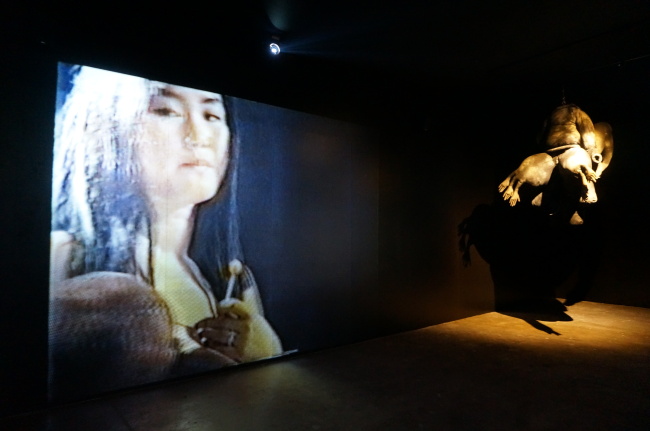 (Left) A video of the performance “Abortion” in 1989 and the oversized costumes with monstrous malformations Untitled (Cravings Black), which artist Lee Bul wore on the streets of Korea and Japan in 1989 as part of her performance. (Lee Woo-young/The Korea Herald)
Established Korean contemporary artists such as Lee Bul and Yoon Suk-nam are presenting their works at the Gwangju Biennale for the first time. About 90 percent of the artists are new to the Biennale and many have never shown before in Korea.

“The 10th Gwangju Biennale reflects on this spiral of violent or symbolic events of destruction or self-destruction ― setting fire to the home one occupies ― followed by the promise of the new and the hope for change,” wrote Morgan in the introduction to the exhibition.

The opening performance by Korean artist Lim Min-ouk was an interpretation of this year’s theme that centers on Korean history and society. Lim brought attention to the victims of the massacres of suspected communists before and during the Korean War (1950-1953). She brought a container with remains of the victims and also invited their families. She had the families greeted by the mothers of those who died in the May 18 Democratic Uprising in Gwangju.

The performance, which took place on Sept. 5, sought to heal the wounds of the victims and their families, who were wrongfully accused of being communist or potential collaborators with the North Korean regime.

Lim’s installation of thousands of canes on exhibit reveals the “sorrow, anger, solitude and curse” of the Dec. 24, 1949, massacre as seen through the eyes of one of the survivors.

The exhibition, divided into five galleries, features the voices of women and sexual minorities, satirical and critical views on commercialism and reinterpretations of historical events around the world. Art experts and curators hailed the exhibition’s ability to unify different works containing strong images and messages together under a single theme.

“The exhibition is laid out well with a great curatorial work. The theme is well explored in a very sophisticated and professional manner. It shows a close and deep relationship with artists and the exhibition organizers,” said Yoo Jin-sang, art critic and professor at Kaywon School of Art and Design.

The exhibition successfully combines the two big pillars of the exhibition ― burning and house. It sets the unified tone with the smoke-motif graphic wallpaper by El Ultimo Grito, a Spanish-born, London-based design duo. To address the space of the house, the exhibition features a house installation by Swiss artist Urs Fischer that recreates the artist’s New York apartment on a 1:1 scale, replicating the interior walls through three-dimensional illusionistic wallpaper.

The theme of burning is explored in the stove installation by Sterling Ruby, charcoal fragments from a Florida forest fire by Cornelia Parker and the burning fire ring by Olafur Eliasson. The works that symbolize burning call for the ability to sprout like a forest after a wildfire. 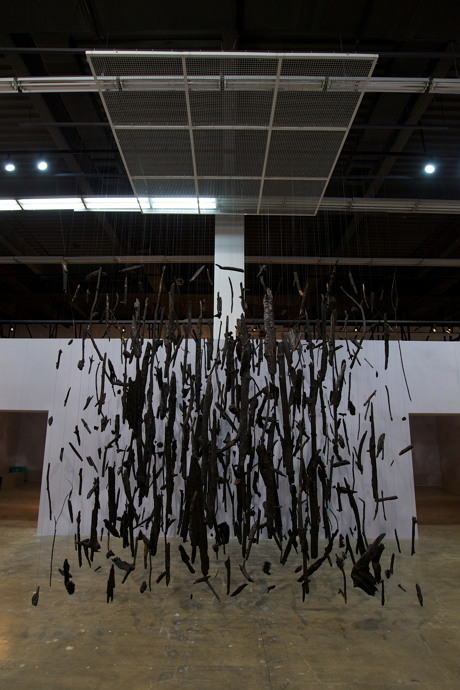 “Heart of Darkness” by Cornelia Parker (Gwangju Biennale)
Other highlights include Lee Bul’s 1989 performance and costume work that won the Noon Award at the Gwangju Biennale 2014. The artist’s performance on abortion replays on a screen next to the oversized costumes with monstrous malformations. The artist wore it on the streets of Korea and Japan in 1989 to express oppression and prejudice against women in a male-centric society.