[ The Korea Herald – Send E-mail ]
Number of premature babies on rise in Korea
More pregnancies after age 35, depression, infertility treatments among main causes
By Claire Lee
Published : Sep 11, 2014 - 21:03
Updated : Sep 11, 2014 - 21:03
While South Korea’s birthrate hit the lowest level on record last year, the number of premature births are on the rise in the country, according to government data.

The number of premature births increased to 6.5 percent last year from 5.9 in 2010. In 2000, only 3.8 percent of newborns in the country were born premature, before 37 completed weeks of gestation.

The number of low birth-weight babies ― infants weighing less than 2.5 kilograms at birth ― is also on the rise in the country, from 5 percent in 2010 to 5.5 percent last year.

According to a report submitted to lawmaker Nam Yoon In-soon’s office by the Health Ministry, some of the biggest causes of the increased preterm births in the nation include more pregnancies after age 35, depression during pregnancy and side effects of infertility treatments. 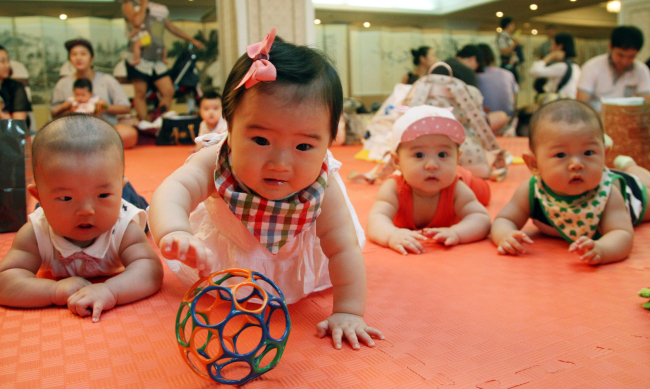 The number of premature births is on the rise in South Korea, a country whose birthrate is among the lowest in the world. (Yonhap)
Nam Yoon also stressed that some 13 percent of Korean pregnant women and new mothers experience depression, and untreated depression during pregnancy can raise the risk of problems during delivery, such as low birth weight as well as premature birth. According to Nam Yoon, the number of women who experience depression during pregnancy is higher than those who suffer from postpartum depression.

According to the Korea Institute for Health and Social Affairs, preterm labor occurred more often among teen mothers and mothers aged 35 or older.

“The reasons behind increased preterm births in Korea are linked with a variety of social and economic factors,” said lawmaker Nam Yoon in a statement.

“It is necessary for the government to come up with plans to ensure women’s mental and emotional health during pregnancy. It is also important to provide more support for teen mothers, as the statistics reflect their lack of social and economic means, on top of their biological immaturity.”

According to Nam Yoon’s office, the number of pregnancies after age 35 is also increasing, which contributes to the rising number of preterm births in the country.

On average, Korean women give birth to their first child at age 31.84, according to Statistics Korea.

Meanwhile, South Korea’s birthrate remains among the lowest in the world. In July, KIHASA said almost half of South Korea’s total population would be at least 65 by 2100, if the country maintains the current birthrate of 1.19 children per woman.

Last month, a government projection showed that South Koreans could go extinct by 2750 due to the critically low fertility rate.

Among all Korean cities and provinces, Seoul had the lowest birthrate last year. One of the reasons behind the capital city’s low fertility rate is its large number of working women who put off marriage and childbearing for the sake of their careers.

Preterm birth is among the top causes of death in infants worldwide. According to the World Health Organization, over 1 million infants die annually from premature birth complications.