[ The Korea Herald – Send E-mail ]
[Herald Interview] Williams encourages people to appreciate Korea’s treasures
By Korea Herald
Published : Sep 3, 2014 - 20:53
Updated : Sep 3, 2014 - 20:53
Aside from being the largest museum in the Western Hemisphere, the Metropolitan Museum of Art in New York City is one of the most renowned and best-known museums in the world, attracting more than 6.2 million visitors every year.

As the Met’s chief audience development officer, Donna Williams says she has had a number of opportunities to work closely with her local Korean-American community, adding that the establishment of its Asia Wing has “built a very big connection” with it.

“We had this wonderful Silla exhibition and it was just so well received,” said Williams, who was one of the 16 cultural figures invited to participate in this year’s Culture Communication Forum. 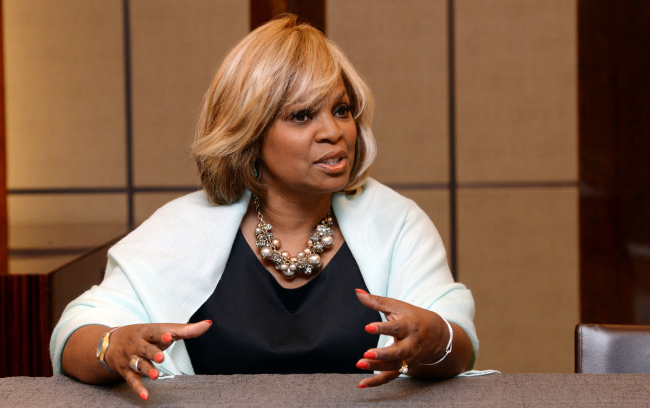 Donna Williams, chief audience development officer at the Metropolitan Museum of Art, New York. (Ahn Hoon/The Korea Herald)
“We were so fortunate, so pleased that you gave us some of your national treasures to take care of,” she added.

Williams says that although she has been able to get a small glimpse of Korean life and customs through her work, having the chance to come to Korea for the first time, needless to say, is an entirely different experience.

“Being here first-hand makes a lot of difference,” she said. “Being able to see and touch ... we were immersed in the culture and so it gives me a greater understanding of the community itself, but also the people.”

“When I first came, I didn’t know what to expect,” Williams continued. “I was so pleasantly surprised in that it’s just like a lightning rod of excitement, energy and innovation. I think it’s a very contemporary culture and grasping at the future, and that is very stimulating.”

Williams admitted that she did have some preconceived notions of Korea being a more modest and traditional society and was not expecting such modern and fast-forward thinking in terms of Seoul’s architecture and technological structures.

“The National Museum, that was extraordinary. I was expecting to see something very traditional. … But then to see such a contemporary building, the architecture, the way that systems were operating, it was quite amazing to enjoy,” she said.

“I’ve already been on the phone, telling people that they have to come here. ... The nature of the people to make things better, brighter and more accessible is something that I would love to share. As far as the art work is concerned, I was astounded by such beauty.

“I would really encourage people to see some of these treasures.”