[ The Korea Herald – Send E-mail ]
[Weekender] Societal aging poses challenge to health sector
Specialized hospital care for elderly patients on the rise but concerns of safety remain
By Claire Lee
Published : Aug 29, 2014 - 20:57
Updated : Aug 29, 2014 - 20:57
Stepping inside Gangnam-gu Haengbok Convalescence Hospital, it is easy to mistake the property for some kind of leisure resort. There is a sauna, a beauty salon, as well as a cafe on top of its fully equipped physical therapy center. With colorful paintings on the walls and lush trees surrounding the grounds, the hospital has that modern and cozy, “home away from home” ambience.

Located in Segok-dong, a relatively quiet area in Seoul’s affluent district of 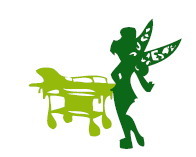 Gangnam, the hospital ― which opened in April ― is the latest addition to the country’s specialized medical facilities for the elderly. The number of residential hospitals for senior citizens has increased dramatically since the late 1990s, from two in 1997 to 1,235 this year.

Such an increase is not surprising considering South Korea’s ever-growing elderly population and its need for medical services. The Health Ministry predicts that those who are aged 65 or older will account for 24.3 percent of the nation’s entire population by 2030, and 40.1 percent by the year 2060. The coming aged society is generating both concerns and business opportunities for the nation’s health sector, including an inadequate number of professional caregivers and lax safety standards.

“What is concerning is that many of the diseases the elderly population suffers, such as diabetes and Alzheimer’s disease, cannot be cured completely and require constant medical attention. And treatment for a lot of chronic diseases, which often require residential nursing home stays, can take years,” said a health worker who did not want to be named.

“But I am not sure if (the Korean medical field) is ready for such patients. In order to serve a large number of people with chronic conditions, we need more staff that are well-trained and more facilities that are safe.”

In 2011, a Korean individual aged 65 or older had an average of 3.34 chronic diseases, with diabetes, Alzheimer’s disease and osteoporosis being especially common. Among them, Alzheimer’s disease is considered a serious threat to the country’s future economy. Health authorities predict the number of those with the brain disease will exceed the 1 million mark by the year 2024, and that it will cost some 43.5 trillion won ($43.1 billion) to treat by 2030.

In July, the Health Ministry introduced a new ranking system for the nation’s long-term care insurance program, which covers 80 percent of the cost of staying at a residential facility for elderly dementia patients. With the new program, patients with mild dementia symptoms ― some 50,000 of them ― became eligible for the insurance benefits, the ministry said. Under the old system, only those with severe symptoms of Alzheimer’s disease, such as being unable to eat or use the toilet alone, were allowed to enroll in the program.

In spite of the increased number of insured dementia patients, however, a severe shortage of caregivers in nursing homes has been raising public concerns for both the patients’ and workers’ safety and well-being.

Last year, some 195,000 elderly patients were admitted to residential facilities but only 51,000 caregivers were registered. In May, a total of 20 patients and a nurse were killed in a fire at a medical facility for the elderly in Jangseong, South Jeolla Province. The fire was set by an 81-year-old patient suffering from dementia.

Even at Gangnam-gu Haengbok Convalescence Hospital, the largest number of its patients ― 64 percent ― are being treated for cerebrovascular disease, a group of brain dysfunctions including vascular dementia and stroke.

Some of the treatments the hospital offers include water therapy in a pool and robot-assisted therapy for patients who became immobile due to brain diseases, stroke or spinal cord injuries. Patients can also benefit from the hospital’s traditional Korean medicine treatment and even its dental clinic. Depending on one’s condition and illness, the hospital bill ranges from 400,000 won ($390) to 1 million won. 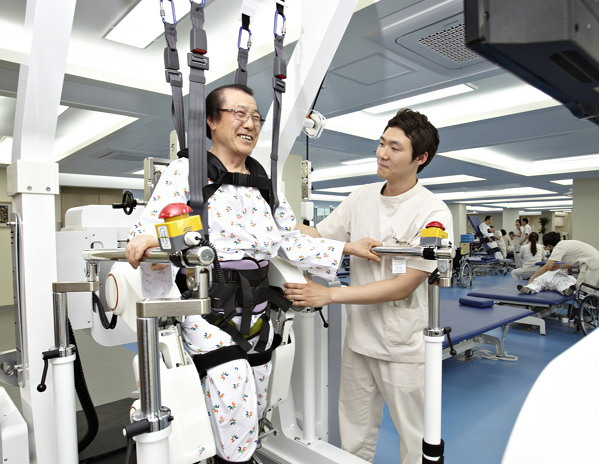 A patient undergoes robot-assisted therapy, which helps people who became immobile after suffering frombrain or spinal injuries, at Gangnam-gu Haengbok Convalescence Hospital. (Gangnam-gu Haengbok Convalescence Hospital)
“The major difference between hospitals for elderly patients and nursing homes today is that those who come to hospitals actually need medical treatment (on top of rest),” said Han Il-woo, the president of the hospital.

“The earliest hospitals for the elderly mainly focused on providing an ideal environment for convalescence, then started to provide rehabilitation treatments. And they eventually began offering medical treatments for diseases that are especially common among the elderly, such as cancer and dementia.”

Meanwhile, some regions in the country do not offer any options for diseases commonly seen among the elderly at all. Lawmaker Choi Dong-ik recently revealed that a total of 86 Korean cities and districts currently have no psychiatric clinics available, while 125 don’t have any rehabilitation clinics.

“I am planning to introduce a bill where hospitals in cities that do not have many medical facilities will be given more government (financial) support to run their services,” he said.