The market for goods and services geared toward the elderly is projected to grow at an annual average rate of 12.9 percent until 2020, according to a report by the Korea Chamber of Commerce & Industry, while the average overall growth rate is estimated to stay at about 4.7 percent.

The Ministry of Health and Welfare also projects the scale of silver businesses would reach 124 trillion won ($120 billion) in 2020, compared with 33 trillion won in 2010.

By segment, the ministry’s report forecasts that financial products will take the lead by expanding to 61 trillion won in terms of market scale, followed by food with 16.6 trillion won, leisure with 16.2 trillion won and nursing facilities with 12.5 trillion won.

The silver industry is expected to take up 4.39 percent of the gross domestic product in 2018, though it is currently below 2 percent, Hyundai Economic Research Institute predicted in its recent analysis.

“In a bid to elevate the consumption capacity of baby boomers, who were born between 1955 and 1963, the government should push for policies that diversify pension products and relieve them of the burden of medical costs,” said Cho Ho-jeong, a research fellow at the institute. 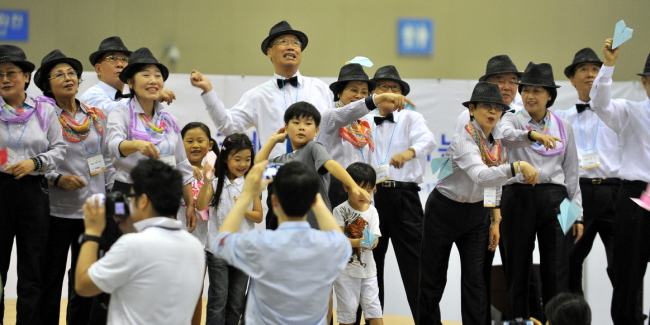 Elderly people perform with their grandchildren during a rehearsal for SENDEX 2014, a silver industry fair, in Goyang, Gyeonggi Province. The exhibition kicked off on Thursday.
More financial service firms are betting on retirement products to attract more of the aging population as customers.

The nation’s pension reserves are expected to reach 200 trillion won by 2016 and the number of subscribers will reach approximately 6.4 million, according to a research analyst at KB Kookmin Bank.

Shinhan Bank has opened 70 Future Planning centers nationwide for those who seek consulting services on their lives after work. It plans to gradually increase the number of centers.

Shinhan has also introduced a bank account, dubbed Future Planning, to help retired customers better manage their financial assets after retirement. Also, education programs will be offered to customers who want to plan their lives outside of finances.

The Korea International Trade Association reiterated the significance of the silver industry in terms of global competitiveness and exports. It predicted that the growing elderly population would be a key factor. It could drive the global market and create niche products in the coming years.

The government is vitalizing fairs for silver-oriented businesses. A representative event is SENDEX, Korea’s biggest trade fair that focuses on seniors and the disabled.

SENDEX is an annual exhibition for senior-related businesses in health care and other industries. It also helps the elderly find jobs. It has been organized by the Ministry of Health and Welfare and conducted by Korea Health Industry Development Institute since 2004.

SENDEX 2014, which kicked off on Aug. 28 for a three-day run in Goyang, Gyeonggi Province, provided information on nine segments such as medical devices, medical treatment, housing, food and financial services for the elderly.

Additionally, more sheltered housing for elderly people, called “silver towns,” and hospitals targeting the elderly have been built over the past few years.

The number of senior nursing facilities including 1,284 hospitals for the elderly, came to 6,008 in April, and Korea now has more than 30 silver towns.

As for care for the elderly, an Internet website, dubbed Yoyangin, is gaining popularity for its quick and easy format. It provides information about 20,000 care institutions nationwide from hospitals to silver towns.

Meanwhile, companies like Korea Yakult Corp. have actively pouring investment into the development of healthy food for the elderly.

Yuhan-Kimberly ― with support from the Ministry of Health and Welfare ― is scheduled to open an elderly-focused shopping mall in downtown Seoul in October 2014.

A company spokesman said the mall would attract a variety of small businesses catering to the elderly.